A passionate argument on behalf of the middle class, Inequality for All features Robert Reich – professor, best-selling author, and Clinton cabinet member – as he demonstrates how the widening income gap has a devastating impact on the American economy. The film is an intimate portrait of a man whose lifelong goal remains protecting those who are unable to protect themselves. 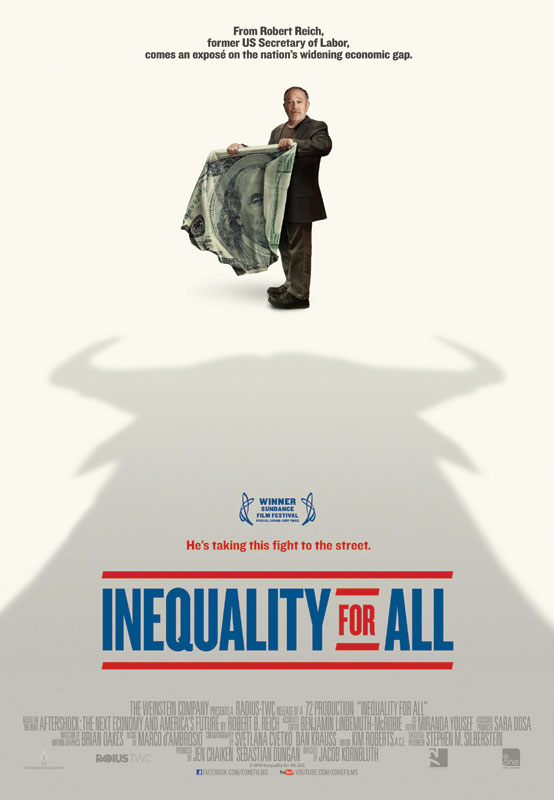 What’s the big deal, you may ask? Didn’t the wealthy earn it? INEQUALITY FOR ALL is happy to acknowledge that. There is no vilifying of the rich here. The problem is that wide income divisions threaten the health of both the economy and the democracy.

Through his singular perspective, Reich explains how the massive consolidation of wealth by a precious few threatens the viability of the American workforce and the foundation of democracy itself. In this INCONVENIENT TRUTH for the economy, Reich uses humor and a wide array of facts to explain how the issue of economic inequality affects each and every one of us.

Inequality for All directed by Jacob Kornbluth, takes on the income inequality gap full force by seeking out workers, individuals and families across different income levels giving us a glimpse of the real-world impact of the policies Bob discusses. This film incorporates 100% of the economic scale, from the families at the bottom to the CEOs at the top. We meet pillow manufacturer and venture capitalist Nick Hanauer, who was an early investor in Amazon and a clear member of the top 1%.

Nick opens up about his spending habits and explains that regardless of how much money he makes in a year or has in his bank account, he cannot make up for the decreased spending of our middle class. As a successful businessman, he recognizes that the middle class are our job creators – that they are the fuel that keeps our economic engine running. As Nick explains, “Even a person like me who earns a thousand times as much as the typical American doesn’t buy a thousand pillows a year.”

“This movie is critically important. It exposes the heart of our economic problem. Something that’s been getting worse and worse for over 30 years. Widening inequality.” – Robert Reich

DIRECTOR’S STATEMENT
It was quite a challenge, as a narrative filmmaker, to think about how I might approach a documentary about widening income inequality. As I thought about it more, however, I realized my background could be a real asset. I decided my goal with this film, first and foremost, was to take a conceptual and abstract topic and find a way to tell an approachable and human story about it. Every choice – from letting Reich’s humor show through to approaching interview subjects as people rather than victims – was designed to help show the argument and the economy in human terms that people could wrap their heads around.