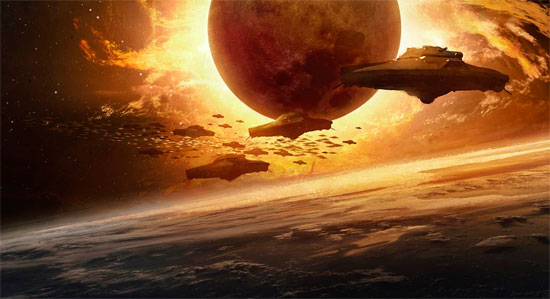 Iron Sky is a science-fiction comedy film directed by Timo Vuorensola. Set in 2018, it tells a story where German Nazis, after being defeated in 1945, fled to the Moon where they built a space fleet, and are now ready to conquer Earth. The film comes from the makers of Star Wreck: In the Pirkinning and was produced by Tero Kaukomaa of Blind Spot Pictures. 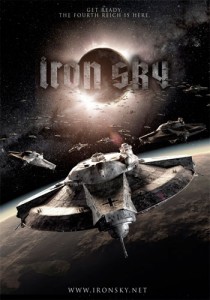 Production of Iron Sky began in early 2006, and the production team took their teaser trailer of the film to The Cannes Film Festival in May 2008 seeking co-financiers and signed a co-production agreement with Oliver Damian’s 27 Films Prods.

Samuli Torssonen was responsible for the computer generated effects of the film. The screenwriters were Johanna Sinisalo and Michael Kalesniko. The film was financed by Energia Productions, Blind Spot Pictures, New Holland Pictures and 27 Films production companies, and it is scheduled to be released on 4 April 2012.

In the last moments of World War II, a secret Nazi space program evaded destruction by fleeing to the Dark Side of the Moon. During 70 years of utter secrecy, the Nazis construct a gigantic space fortress with a massive armada of flying saucers.

When American astronaut James Washington (Christopher Kirby) puts down his Lunar Lander a bit too close to the secret Nazi base, the Moon Führer (Udo Kier) decides the glorious moment of retaking the Earth has arrived sooner than expected.

Washington claims the mission is just a publicity stunt for the President of the United States (Stephanie Paul), but what else could the man be but a scout for the imminent attack by Earth forces? The Fourth Reich must act!

Two Nazi officers, ruthless Klaus Adler (Götz Otto) and idealistic Renate Richter (Julia Dietze), travel to Earth to prepare the invasion. In the end when the Moon Nazi UFO armada darkens the skies, ready to strike at the unprepared Earth, every man, woman and nation alike, must re-evaluate their priorities.

The movie is only one part of the Iron Sky family of products. In addition to the merchandise there are several other Iron Sky themed products.

Comics and novels: Iron Sky will have three prequel comics, which will be published before the movie, in addition to which there will be a full fledged graphic novel of Iron Sky story. One of the creators of this project will be the industrial artist Gerry Kissell, whose previous productions include the comic versions of the A-Team movie and the Army of Two videogame. There will also be a novelization of the Iron Sky film, and a book about how this unprecedented movie project was created.