Jane Eyre is a film directed by Cary Fukunaga and starring Mia Wasikowska and Michael Fassbender. The screenplay is written by Moira Buffini based on the 1847 novel of the same name by Charlotte Brontë. 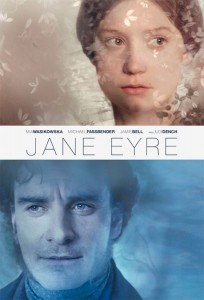 The film is a co-production between BBC Films, Focus Features and Ruby Films. The script by Moira Buffini appeared on the 2008 Brit List, a film-industry-compiled list of the best unproduced screenplays in British film. The adaptation is expected to stick closely to the book. However, the character of Blanche Ingram is less conniving than in the novel.

In October 2009, it was announced that Cary Fukunaga would direct the adaptation. The adaptation will play up the Gothic elements of the classic novel. Fukunaga stated, “I’ve spent a lot of time rereading the book and trying to feel out what Charlotte Brontë was feeling when she was writing it. That sort of spookiness that plagues the entire story… there’s been something like 24 adaptations, and it’s very rare that you see those sorts of darker sides. They treat it like it’s just a period romance, and I think it’s much more than that.”