Machete is an  action-exploitation film co-written, produced, and directed by Robert Rodriguez and Ethan Maniquis. It is an expansion of a fake trailer that was released together with Rodriguez’ and Quentin Tarantino’s 2007 Grindhouse. Machete continues the B movie and exploitation style of Grindhouse, including in part the same footage. 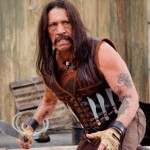 A fake trailer for the film was released on May 5, 2010, through Ain’t It Cool News. The trailer opened with Danny Trejo saying, “This is Machete with a special Cinco de Mayo message to Arizona,” followed by scenes of gun fire, blood shed, and highlights of the cast.

Danny Trejo stars in his first lead role as the title character. He also played the role of a character named Machete in the Spy Kids franchise, which Rodriguez directed. However, they are not intended to be in the same fictional universe.

Cheech Marin and Jeff Fahey return to portray their characters from the original trailer, while Michelle Rodriguez, Steven Seagal, Lindsay Lohan, Don Johnson, Jessica Alba, and Robert De Niro filmed scenes for the film during the fall of 2009.

The first screening will take place on September 1, 2010, out of competition at the 67th Venice International Film Festival. Machete will then be released in the United States by 20th Century Fox and Rodriguez’ company, Troublemaker Studios, on September 3, 2010.

The story revolves around Machete (Danny Trejo), a former “Mexican Federale” turned renegade. After a shakedown with a druglord (Steven Seagal), Machete roams Texas looking to do yard work in exchange for money. Michael Benz (Jeff Fahey), a local businessman and spin doctor, explains to Machete that the corrupt Senator McLaughlin (Robert De Niro) is sending hundreds of illegal immigrants out of the country.

In order to stop this, Benz offers Machete $150,000 to kill McLaughlin. Machete accepts the murder contract. As Machete attempts to assassinate McLaughlin during a rally, he is double-crossed and one of Benz’ henchmen shoots him. It is revealed that Benz orchestrated the entire attempted assassination as part of a false flag operation to gain public support for McLaughlin’s harsh anti-immigration laws.

By setting up Machete as the patsy, the conspirators make it appear that an outlaw illegal Mexican immigrant has tried to assassinate the senator.