Furious 7 picks up more than a year after Dom’s (Vin Diesel) and Brian’s (Paul Walker) crew has returned to the States with their pardons. We find them transitioning into life on the right side of the law, but home has taken on a surreal quality. Dom tries desperately to reconnect with Letty (Michelle Rodriguez), while Brian struggles to acclimate to suburban life with Mia (Jordana Brewster) and their son, and Tej (Ludacris) and Roman (Tyrese Gibson) celebrate their freedom by living the playboy dream. 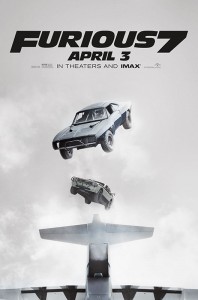 As the Furious 7 production was underway in November 2013, tragedy struck and our family lost a beloved father, son and brother, and the world lost a treasured friend, co-worker, talent and humanitarian: Paul Walker. Those who had been fortunate enough to work with Walker over his five films in the Fast & Furious franchise shared the sentiments of everyone who was touched by his life on and off screen. This loss was nothing less than devastating.

As Fast & Furious 6 concluded and director Justin Lin wrapped his four-film-long run with the franchise, producers Moritz and Diesel and screenwriter Morgan began the search for somebody to take the position behind the camera.

Australian director James Wan, who had reinvigorated the suspense genre with such blockbuster hits as Saw, The Conjuring and Insidious, would sign on to take over the reins for the next chapter. Known for character-driven, innovative and commercial fare that features dramatic tension in highly visual work, Wan knew he was ready to helm the latest entry of a series synonymous with inventive mythology and over-the-top action.

Diesel speaks on behalf of his fellow cast and crew when discussing why Furious 7 had to be the ultimate celebration of Paul Walker’s life who died during the production: “Paul was a brother to me. The relationships among the Fast family are deep and meaningful, and our characters would do anything for each other. That support and sense of family that exists in the film bleeds off screen with us. With this film, the whole world gets to feel a part of our family.”

In Furious 7, Roman maintains his bravado as he pushes for more of a leadership role.    Chris “Ludacris” Bridges reprises his role of Tej Parker, the automotive and tech tactician who first appeared in 2 Fast 2 Furious alongside Walker and Gibson. One of the more complicated relationships for Dom is with the other love in his past, Elena Neves, portrayed once again by Elsa Pataky. The Spanish actress debuted in Fast Five as the feisty Rio cop who connects with the renegade expat over their shared losses and leaves her home and career behind to go into exile with him.

In the Fast tradition of villains, Owen Shaw had been the most impressive rival the crew had come up against. However, with one lethal move against Han, Statham’s Deckard Shaw eclipses his brother with an endgame even more personal: to take Dom and the crew down, one by one. “Shaw’s a force to be reckoned with,” cites Moritz. “Our guys are warriors now. Some of the best in the world, and we needed a warrior who could go up against them. We all had that gut feeling that Jason Statham should be our man, which was confirmed with the overwhelming response to his appearance in the last film.”

British actress Nathalie Emmanuel, best known for her role as Missandei, translator and companion to Daenerys Targaryen on the enormous hit HBO series Game of Thrones, joins the cast in the role of Ramsey, the genius underground hacktivist whose latest masterpiece of technology, known as God’s Eye, is the key to tracking down Shaw before he can hunt down our team.

Whether fast or furious, when it comes to the cars used in the Fast series, the formula is simple. It is up to picture car coordinator Dennis McCarthy, a lifelong car enthusiast who turned his passion into a career, to fully realize that guiding principle.

From the get-go, McCarthy knew the cars needed to satisfy a long list of requirements for story points, practically executed action on the ground and in the air. From the mountain rescue sequence with one-of-a-kind, off-road muscle cars to the final showdown—among the team, Hobbs, Shaw and Jakande’s mercenaries on the streets of Los Angeles—McCarthy and his crew custom built and modified the majority of the fleet to handle the pounding that Morgan’s script inflicts on the cars…not to mention the stunt team.

McCarthy fabricated badass off-road versions of Dom’s trusty 1968 DODGE CHARGER R/T, as well as Letty’s 2015 DODGE CHALLENGER SRT 392, Roman’s 1968 CHEVY CAMARO Z/28, Brian’s 2014 SUBARU WRXSTI and Tej’s 2014 JEEP RUBICON X. The “Franken-cars” needed to withstand a gamut of stunts expected from a Fast & Furious car, with the added mobility to handle off-road demands. As Dom says, matter-of-factly: “I want the demon love child between that Charger and that [pointing at a military Humvee]. This time it ain’t about being fast.” Perhaps the most challenging task for McCarthy was the limited time frame in which to conceptualize and build the five off-road hero cars needed to pull off a roadside raid alongside a speeding convoy in the Bass Göynük mountains in Azerbaijan.

But the real crown jewel of the Abu Dhabi sequence is the prized multimillion-dollar W MOTORS LYKAN HYPERSPORT, which is housed in a vault of a billionaire’s 80th-floor penthouse towering above the city. For the production, McCarthy was able to secure five replicas, in addition to the original. The replicas would do all the heavy lifting, while the $3.5 million original was used for close-ups and tighter beauty shots.

Statham doesn’t miss out on stunning cars either. He is outfitted with a quintet of fast, functional vehicles: a 2014 JAGUAR F-TYPE R, 2014 MASERATI GHIBLI, a Fast Attack military vehicle, a 2010 LAMBORGHINI AVENTADOR and a 2008 ASTON MARTIN DB9.

Years spent as fugitives have finally brought the crew back to Los Angeles, but this comes at a steep price. The devastating loss of Gisele (Gal Gadot), coupled with Letty’s struggle to cobble together her present with chunks of her elusive past, has profoundly affected them all.

Returning to L.A., where it all began, was something the cast wanted as much as their on-screen counterparts. But, more importantly, it was essential they revisit iconic locations such as the Toretto house, the outlook at Dodger Stadium, the empty nighttime streets east of downtown and the hot, dry desert for Race Wars.

Principal photography began in September 2013 in Atlanta, where cast and crew previously filmed Fast Five. A number of interior sets along with exterior green-screen sets were built north of Atlanta, including the opulent Abu Dhabi penthouse party space and bedroom sets, as well as the cement factory and Hobbs’ office.

A group of several hundred well-dressed background actors, gold-painted go-go dancers, stunt players and a sexy red Lykan joined principal cast, rapper T-PAIN, who joined in as the party deejay, and crew over the course of a week to film the elaborately choreographed scene, which lifted the curtain on how billionaires party.

As is the norm with the last three Fast films, no matter what far-flung locales Morgan’s scripts take them to, the cast and crew always return home to spend their last days of production filming in Southern California. Furious 7 is no different, as Diesel and Rodriguez spent the last day of filming speeding along a back road in a fast car.