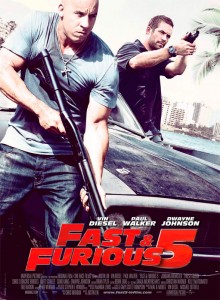 On March 2010, producer Neal H. Moritz revealed in an interview that Fast Five would film in Brazil, Caguas Puerto Rico, Los Angeles and Atlanta. He also stated that the sixth installment of the series is also being developed, but both films will not be shot back-to-back.

Vin Diesel and Paul Walker lead a reunion of returning all-stars from every chapter of the explosive franchise built on speed in Fast Five.

Justin Lin wanted to explore the elements of “freedom and family” in the film and collaborated with Morgan towards that ideal, both having worked together on previous installments of the franchise. Morgan worked with Diesel to produce a story arc that would further explore and develop Diesel’s character. An idea involving heisting a large safe had been conceived by Morgan during the production of Fast & Furious, but that film’s premise did not work with how Morgan envisioned it. He later incorporated it into Fast Five.

On a budget of $125 million, the shooting of Fast Five was scheduled for July and August 2010. Shooting had started by July 14, 2010, but it took longer than forecast: the film was still being shot in early November 2010.

Eva Mendes appears in an uncredited cameo as undercover US Customs agent Monica Fuentes, reprising her role from 2 Fast 2 Furious.