Following in his father’s footsteps and hoping for some much-needed family bonding, a grown-up Rusty Griswold (Ed Helms) surprises his wife, Debbie (Christina Applegate), and their two sons with a cross-country trip back to America’s “favorite family fun park,” Walley World. What could go wrong? 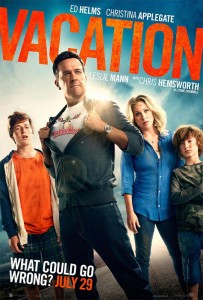 Two different private homes in Atlanta stood in for Stone and Audrey’s home in Texas, one for the rear of the house and a scene where Rusty tries, disastrously, to herd cattle, and one for the interior. A residence in Monroe, Georgia was used for the front of the sprawling ranch.

The Griswolds first hit the screen over three decades ago in the classic comedy “National Lampoon’s Vacation,” giving audiences lasting memories of the disasters that can befall a family on a cross-country road trip. And now they’re back. A little older, not so wiser. Ed Helms stars as Rusty Griswold, taking the vacation torch from his father. Christina Applegate stars as Debbie Griswold, the popular sorority girl who married Rusty.

“Horrible Bosses” scribes Jonathan Goldstein and John Francis Daley wrote “Vacation,” which also marks their feature film directorial debut. Both are die-hard fans of the film franchise, particularly the one that launched it.

Producers David Dobkin and Chris Bender had joined the conversation to revisit a franchise they also regard with great affection and were excited about Goldstein and Daley’s reverence for the original.

Goldstein and Daley’s instincts convinced Chevy Chase and Beverly D’Angelo to slip into their familiar characters once again. Having the ones who started it all bless “Vacation” with their presence was worth the price of admission for everyone involved. “It was a dream come true. We were fan-boying the entire time we were directing,” laughs Goldstein. Chase, who returns as one of the world’s best known—and wackiest—on-screen fathers, now a grandfather, reflects, “I loved the script and John and Jonathan’s take and was flattered to be invited along,” D’Angelo, who returns as Ellen Griwsold, recalls, “When I got the final script, I just started to smile by page three. I called Chevy and said, ‘They nailed it. It’s funny, really, funny.’”

To find the perfect man that is Stone Crandall, the filmmakers looked to the gods, or at least one of them. Chris Hemsworth, who has notably saved the world as the popular mythical figure Thor, was excited to come on board.

One of the scene stealers of “Vacation” is the Tartan Prancer. Filmmakers had a blast designing the fictional car for the famous Griswold family to take for a spin. “We went through a lot of names for the Prancer,” recalls Goldstein. “It was almost going to be the Squirt, I think. There were some pretty offensive ones.” As they went down that conceptual road, the writers/directors’ basic inspiration for the Tartan Prancer was a vehicle that is symmetrical—it looks like it has two front ends.

The art department turned over the actual fabrication of the car to Dennis McCarthy and his team at Vehicle Effects. They sourced five 1995 Toyota Previas, and the transformation began. First, they sculpted front, back and side fiberglass molds that were then mounted on the Previas. Since the Previa is not a four door vehicle, a hunt began for four passenger side driver doors. After an extensive search, they were finally located in England and shipped to the U.S. The doors on both sides of the car were then converted to “suicide” doors.

“Vacation” was shot primarily in and around Atlanta, Georgia, which happens to be Ed Helms’ home town. The impromptu visit to Debbie’s former alma mater, Memphis State College, was shot at Twelve Oaks Bed and Breakfast in Covington, Georgia.

To recreate Walley World, the production shot at Six Flags Over Georgia in Austell for a week during off season, when it was closed. The production design team’s challenge was creating a newer park at the older style park.