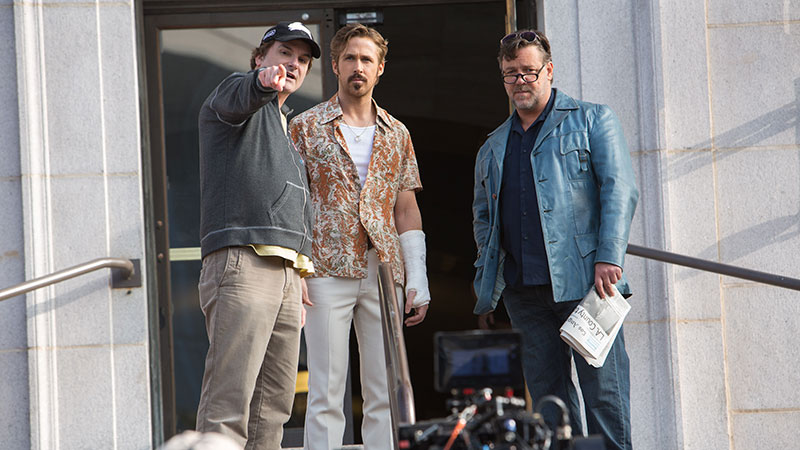 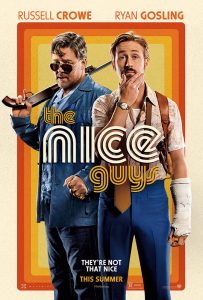 Principal photography began on October 27, 2014, in Atlanta and Decatur, Georgia. On October 31, a police station scene was filmed in Atlanta among extras. Filming also took place in Los Angeles.

This is not the first time writer/director Shane Black has created an unlikely pairing and pitted them against a powerful adversary for which they would, on paper, seem outmatched. Exactly 30 years ago, he sold his first script to producer Joel Silver—an actioner about a by-the-book detective reluctantly partnered with an unhinged cop named Riggs. That movie was “Lethal Weapon”…and the rest, as they say, is history. Following three “Lethal Weapon” sequels, Silver also produced “The Last Boy Scout” and “Kiss Kiss, Bang Bang,” the latter of which marked Black’s directorial debut. After 10 years, they reunited again on “The Nice Guys.”

Black co-wrote the screenplay for “The Nice Guys” with Anthony Bagarozzi, starting out with each focused on one of the central roles. Black reveals, “We had a mutual love of pulp detective novels and wanted to do a private eye project, so I said, ‘I’ll tell you what: you do one character and I’ll do the other.’”

Bagarozzi, who also served as an executive producer, details, “I began with Jackson Healy while Shane wrote Holland March, and then we traded and went back and forth. After a while we got to know them both so well, it was pretty easy for either of us to say, ‘That’s not something Healy would say or that March would do.’

Even before Healy came into March’s life, there was one person keeping him from utter ruin…or at least trying to. Young Australian actress Angourie Rice plays the role of March’s teenage daughter, though it’s often unclear who the parent is in this scenario. Rice won her role over hundreds of other hopefuls in an extensive search. Bagarozzi recalls, “It’s an important role so the casting process ranged far and wide. Angourie was in Australia, so none of us had met her, but she sent in a tape and everyone was blown away. We brought her in and she was the clear choice. She’s not only a good actress but also has the quality of an old soul in a very young girl, which was perfect for the character. And she can just throw on an American accent.” “I guess that’s a sign I watch too much American TV,” Rice laughs.

To better portray father and daughter, Gosling and Rice spent some bonding time prior to the start of production. Rice recounts, “I went to his house and it was right before Halloween, so we carved pumpkins together, which was fun. It was great having Ryan play my dad.”

Cast as Amelia, Margaret Qualley says, “Amelia is passionate about what is happening to the environment and is determined to do whatever it takes to call attention to her cause.”

It turns out that Amelia has powerful connections of her own: her mother, Judith Kuttner, played by Kim Basinger, heads up the California Department of Justice. “The Nice Guys” reunites Basinger with her “L.A. Confidential” costar Russell Crowe, which was only one of the things that drew her to the project. “I’ve known Joel for many years, and then I met Shane and instantly connected with him,” she relates. “I love the way he writes so I wanted to be part of this film.”

Judith Kuttner’s right-hand woman, Tally, is played by Yaya DaCosta, who shares, “I was so excited to play Tally because she has an unexpected twist. It was really fun to take on a character with two very different sides.”

To depict the Los Angeles of 1977, Shane Black collaborated closely with his behind-the-scenes team, including cinematographer Philippe Rousselot, production designer Richard Bridgland and costume designer Kym Barrett. All three department heads credit the script with setting a certain tone, which they then realized through camerawork, lighting, sets and costumes.

Although “The Nice Guys” is set entirely in Los Angeles, most of the interiors as well as a number of exteriors were filmed in Atlanta, Georgia. Bridgland and his team had the dual challenge of accurately portraying not only the era but also the locale. They began by researching the period, watching movies of the time and poring over magazines, newspapers, and even people’s personal photo albums. They also found many authentic items for their set dressing in antique stores and vintage shops.

Equal to fashion and décor, music always serves to evoke a sense of time and place. Apart from Earth, Wind & Fire, “The Nice Guys” features some of the songs and artists who defined the era, including The Bee Gees, KISS, Kool & the Gang, America and Al Green. The songs are interwoven in the score by John Ottman and David Buckley.