A rain-drenched summer evening turns into a deadly cat-and-mouse game for a devoted wife and mother when an escaped killer finds his way into her home in No Good Deed, a classic film noir thriller starring Oscar®-nominee Taraji P. Henson and Golden Globe®-winner Idris Elba. No Good Deed is directed by Sam Miller and written by Aimee Lagos. 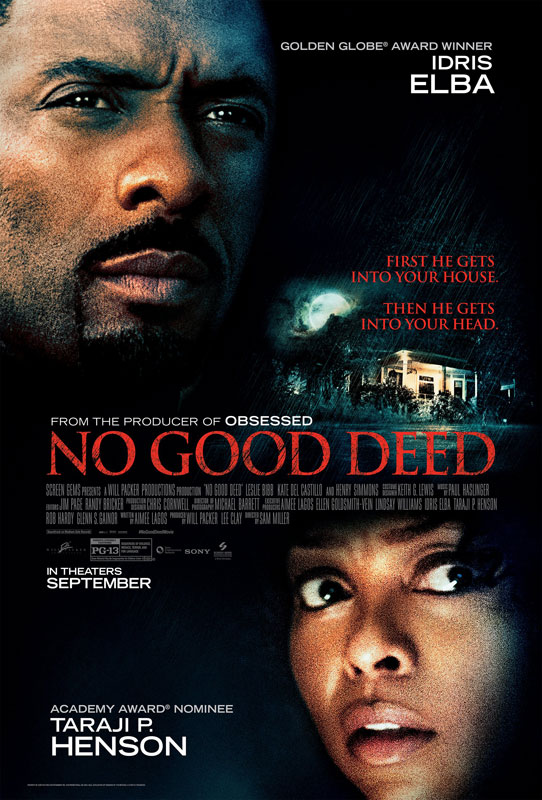 Director Sam Miller describes the movie as “a classic, claustrophobic, sexy thriller in the neo-noir tradition” that discloses its secrets gradually.

To direct, the filmmakers were looking for a seasoned pro who could handle the spine-tingling suspense and often brutal action scenes, as well work with the lead actors to craft sensitive and nuanced portrayals of a beguiling sociopath and the trusting but tough woman he targets. When producer Will Packer asked Elba if he could suggest a director, the response was immediate. The actor recommended Sam Miller, a British filmmaker who had been nominated for a 2012 Emmy® Award for his work with Elba on the acclaimed BBC crime-drama series “Luther.” Packer shared the script with longtime colleague Glenn S. Gainor of Screen Gems, with whom he had previously collaborated on a number of popular and successful films.

At first glance, a face-off between apple-cheeked, 5’ 4” Taraji P. Henson and chiseled, 6’ 3” Idris Elba might seem a bit unbalanced. But the filmmakers saw that the explosive chemistry between the pair would allow the petite actress to give as good as she gets in the escalating physical and mental skirmishes of No Good Deed.

Henson was the first actor attached to the script. “I’d never done a thriller before and I thought it would be fun to do one like this, packed with girl power,” she says. Henson was excited to work closely with Elba, an actor she has known and respected for years. “They mentioned some other names, but we always knew it was Idris,” she says. “We’ve been saying for years that we would find a way to work together, but it had to be something great. Unfortunately, there are no lip-locking or love scenes between us, so we’ll just have to do another one.”

Elba took the time to study up on real-life criminals to gain insight into his mindset. “He is a troubled and anxious man on a mission,” says the actor. “That gave me lots to play with. After doing so much research, I did feel like I understood why he was doing these things.”

No Good Deed was filmed entirely on Will Packer’s home turf in Atlanta, one of the Southeast’s most rapidly expanding filmmaking hubs. From Buckhead, an elite neighborhood often considered Atlanta’s most prestigious, to Inman Park, renowned for its diverse late 19th- and early 20th-century residential architecture, the filmmakers found the authenticity they were seeking in “The Big Peach.”

To capitalize on the sense of realism, the filmmakers chose to shoot the film using the Sony F camera system, which utilizes light as well, if not better, than the human eye, according to Gainor.