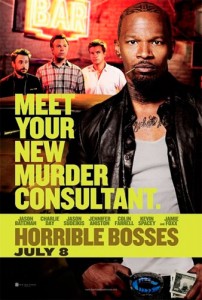 Some of Horrible Bosses filming occurred in Los Angeles. Pictures from the set surfaced online in July, 2010.

New Line Cinema purchased a script from Michael Markowitz in 2005. Directors Frank Oz and David Dobkin were also in talks to direct. Jonathan Goldstein and John Francis Daley rewrote the script in 2010 and the project went into production with Seth Gordon directing.

During pre-production, a number of actors including Owen Wilson, Vince Vaughn, Matthew McConaughey and Ashton Kutcher were linked to roles in the movie. In May, 2010, Jennifer Aniston was in talks for the role of a “sexually aggressive dentist” while Colin Farrell would play a “weaselly scion”. In June, 2010, Kevin Spacey joined the project as Jason Bateman‘s boss, New Line was in talks with several other actors including Tom Cruise, Philip Seymour Hoffman and Jeff Bridges for the role. Jamie Foxx would also be involved.

On July 27, 2010, Isaiah Mustafa was confirmed to join the cast. Mustafa was quoted as saying “It’s a smaller role”.