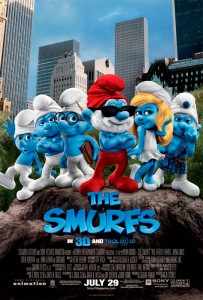 When the evil wizard Gargamel chases the Smurfs out of their village, they’re forced through a portal, out of their world and into ours, landing in the middle of New York’s Central Park. Just three apples high and stuck in the Big Apple, the Smurfs must find a way to get back to their village before Gargamel tracks them down.

After pursuing the film rights for five years, producer Jordan Kerner finally secured the rights to The Smurfs property in 2002 and soon began developing the 3-D CGI feature film with Paramount Pictures and Nickelodeon Movies. In 2006, Kerner said it was planned to be a trilogy and would explain more of Gargamel’s backstory. He stated, “We’ll learn [more] about Gargamel and Smurf Soup and how all that began and what really goes on in that castle. What his backstory really was. There’s an all-powerful wizard… there’s all sorts of things that get revealed as we go along”. Early animation footage was leaked on the internet in early 2008.

In June 2008, it was announced that Columbia Pictures and Sony Pictures Animation obtained the film rights from Lafig Belgium. Kerner said the current project started with Sony during a conversation with the chairman-CEO Michael Lynton, who grew up watching The Smurfs in the Netherlands. Kerner explained, “He relished them as I do and suggested that it should be a live-action/CG film. Amy Pascal felt equally that there was potentially a series of films in the making”. Shrek 2 and Shrek the Third writers, David Stem and David Weiss wrote the screenplay and Raja Gosnell directed.

Principal photography began in New York on March 26, 2010. In May, scenes were filmed in the SoHo of Manhattan. That month production was temporarily halted after a worker fell 30 feet from a set in a toy store on Fifth Avenue and 58th Street; he later recovered at the hospital.