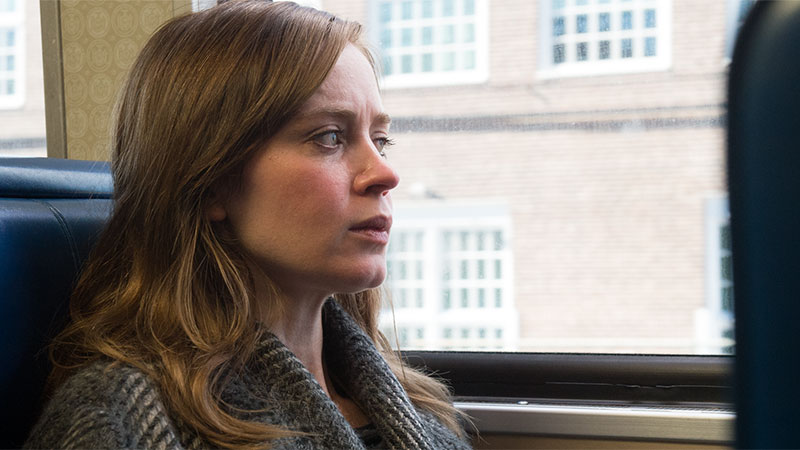 Reeling from a recent divorce and searching to preoccupy her days, Rachel Watson (Rachel Blunt) spends her weekday commute to and from Manhattan quietly gazing out the train windows.  Every morning and evening, she relives memories from just outside the home she once shared with her now ex-husband Tom (Justin Theroux) , who now lives there with his new wife (Rebecca Fergusson), Anna, and their baby. 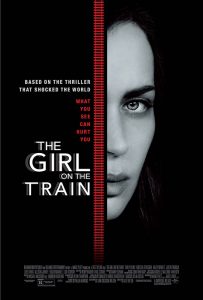 It was director Tate Taylor’s desire that, although Rachel is our primary voice, The Girl on the Train be told from all three women’s points of view. These were incorporated into the camerawork of director of photography Charlotte Bruus Christensen, a young Danish cinematographer whose earlier films include The Hunt and Far From the Madding Crowd.

Although former journalist Paula Hawkins had previously written several books as an author for hire, “The Girl on the Train” was the first novel released under her own name.  After its publication in January 2015, Hawkins’ story became one of the fastest-selling novels in history, with more than 15 million copies sold globally.  In its first week, “The Girl on the Train” landed in the top spot of The New York Times Best Sellers List.  In fact, it remained on the list for more than a year, spending much of that time at No. 1.

The inspiration for her gripping whodunit of witnesses who become suspects was inspired by Hawkins’ daily experiences on the commuter rail through London.  “There was one particular route where the train was always breaking down, and I would sit and look into these apartment blocks, and you could see right into someone’s living room,” she recounts.  “I was always hoping I’d see something interesting, although I never did.   But it started my imagination going, and that’s where the germ of the story came from.”

Producer Marc Platt and DreamWorks acquired the rights to Hawkins’ debut thriller in 2014, prior to the novel’s publication.  “My colleague, Jared LeBoff, read a manuscript that was submitted and thought it was a great story,” recounts Platt.  “He gave it to me, and I loved it.  DreamWorks was reading it then as well, and they felt the same.  We all got married together, bought the film rights and developed it.”

To adapt Hawkins’ book, the filmmakers turned to Erin Cressida Wilson, acclaimed for her film adaptations of female-centric stories, such as Chloe, Fur: An Imaginary Portrait of Diane Arbus and Secretary, which earned Wilson an Independent Spirit Award.  “We were looking for a female screenwriter, and we had long admired Erin’s work,” the producer says.  “Of course, the writer didn’t have to be a female, but it felt like a woman could really capture the voice of the women in Paula’s story.”

Describing “The Girl on the Train” as “the moving Rear Window,” Wilson had also spent much time as a train passenger.  “I sat behind that window a lot, and looked at the backs of houses and just loved it,” she reflects.  “Paula captures that feeling of the rock-a-bye of being on a train, and being lulled to blissful voyeurism.”

While the novel is set in London, a city that is built on commuters coming in on a complicated railway system, the filmmakers opted to set the thriller in and around Manhattan.  “We thought in New York we could find the same kind of environment because New York is also a commuter city that’s parallel to London,” states Platt.  “Setting it in New York also allowed us to have a stronger relatability for our domestic audience, but it doesn’t change the dynamics of the story.”

To helm The Girl on the Train, DreamWorks and Platt turned to Tate Taylor, director of the former’s acclaimed drama The Help and Universal’s powerful biopic Get on Up.  Nominated for the Best Picture Academy Award®, The Help was also honored with Oscar® nominations for several of its female cast, with the film’s Octavia Spencer winning the statuette for Best Actress in a Supporting Role.

Once the production announced it was casting The Girl on the Train, the role of Rachel Watson became a much-sought-after part.  As there are not scores of enviable female-leading roles in Hollywood that represent fully developed and complex characters like Rachel, the calls for consideration were coming in all over.  When the dust settled, only one name rose to the top: Emily Blunt. The Golden Globe Award-winning actress’ versatility has shone in a wide range of roles in such films as the comedy The Devil Wears Prada and the drama The Young Victoria to actioners including Edge of Tomorrow and Sicario.

Blunt first became aware of the phenomenon that was “The Girl on the Train” through her sister, Felicity, who is a literary agent.  “She told me, ‘This book is selling like quick fire.’  I’d go into any airport or bookstore and saw that it was the No. 1 bestseller.”

To play the part of Anna, Rachel’s ex-husband’s new wife, the team cast Swedish actress Rebecca Ferguson, who came to the attention of global audiences with her breakthrough performance in Mission: Impossible—Rogue Nation.

For the role of Megan, the filmmakers cast Haley Bennett, who is known for her roles in Music and Lyrics and The Equalizer.  “Among our three women, Megan is the most lost,” explains Platt.

To cast the two key male roles was just as crucial, according to Platt.  “It’s interesting to be involved in a film that’s so female-centric,” he says.  “Usually, it’s the guys who are more complicated and then there’s the ‘girl’ role, and our challenge here was to develop characters that wouldn’t just be the ‘boy’ role in a film about the women.  The story is also very much about the men.”

The Girl on the Train began filming in the New York area, in November 2015, and would continue through the end of the following January.  Much of the film was shot both on a real train and in a train car built on a stage in Westchester County, just north of Manhattan.  It wasn’t difficult to look on edge for the cast, as they would often find themselves in sub-20-degree Fahrenheit weather.