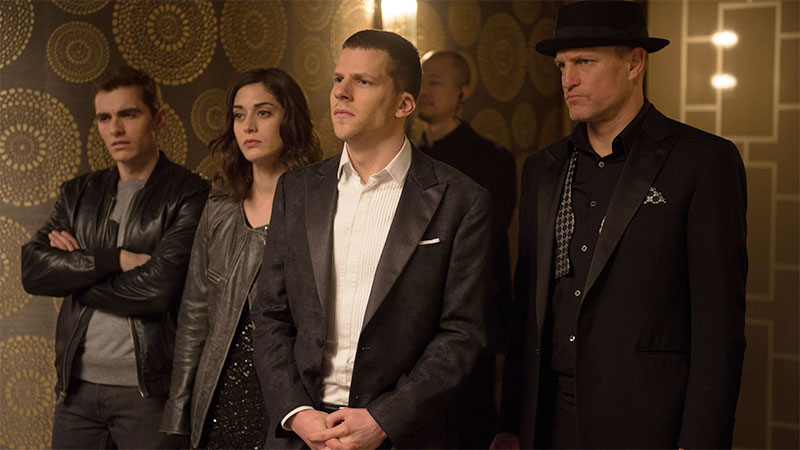 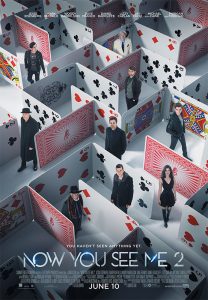 The filmmakers turned to some of magic’s biggest names for help even while developing the script, including mentalist, hypnotist and magician Keith Barry and world-famous illusionist David Copperfield, who serves as co-producer.

The success of the first film, which grossed over $300 million worldwide and earned the People’s Choice Award for Favorite Movie Thriller, made the Horsemen’s return to the screen inevitable, helmed this time by director Jon M. Chu, whose previous credits include two chapters of the popular Step Up series and the 2013 concert film Justin Bieber’s Believe. With expertise in movement, technology and cutting-edge design, Chu brought just the combination of skills the producers were looking for to make big, bold and innovative onscreen magic.

If directing a sequel to a massively successful movie presented a daunting challenge, it was one Chu was anxious to take on. “I admire everyone involved with this film,” he says. “When we all sat down together, it was very intimidating. But everyone was focused on making a great movie, so the collaboration was amazing.”

Producer Bobby Cohen, a veteran of Now You See Me, happily returned to work on the second chapter. Writer Ed Solomon, who co-wrote the first film, collaborated with Peter Chiarelli on the new story, which incorporates even more magic, intrigue and action, as well as an international setting. His goal was to capture the spirit of the original movie while reinventing the concept. “We have this group of characters that we really love hanging out with,” Solomon says. “What could be different this time? We had the idea of presenting them with a magic trick that they get trapped in and have to figure their way out of. We thought that would be exciting and fun, while giving us a lot to work with.”

“I’ve known Jon for about ten years,” says Cohen. “He had just come out of USC film school, where he made an extraordinary short that was a full-fledged musical. He was one of the first people we thought of for this. He really understands that choreography and movement within a frame is essential to what magicians do.”

With an extraordinary cast that includes Jesse Eisenberg, Mark Ruffalo, Woody Harrelson, Dave Franco, Morgan Freeman and Michael Caine in the roles they originated, as well as newcomers Daniel Radcliffe, Lizzy Caplan, Sanaa Lathan and Jay Chou, Now You See Me 2 delivers the chemistry, excitement and mystery of the original as well as an innovative new story.

After having a blast making the first film, Ruffalo was happy to return for the sequel. “The movies have the same joie de vivre we have with each other in real life,” he says. “This is a little bit grander than the first one. The payoff is a final, big magic trick that is mind-blowing and really satisfying.”

Just as the film pushes the limits of illusion, Chu pushes the limits of how films can be made, says Eisenberg. “Jon used techniques on this movie that have never been used before. His interest in finding out what technology can do for cinema totally mirrors what the Horsemen do with magic. He engages the audience in a totally interactive and self-aware way.”

Harrelson so loved the experience of making the first movie that he was eager to jump into the sequel. “There was so much more to explore in this magician-heist-thriller, and I was excited to do it,” he says. “We all have a great deal of affection for each other, so it was fun to be hanging out 12 hours a day, making each other laugh.”

Master pickpocket and cardistry expert Jack Wilder is played by Dave Franco, who learned to fling, flip, rotate and juggle playing cards with amazing speed and accuracy. Chock full of action, humor and drama, Now You See Me 2 has all the things Franco says he looks for in a script.

Lula is a “geek magician” whose work is meant to shock. She is introduced to Atlas when she beheads herself in his living room. “She’s a super fun character, both to write and to watch, and it gets even better when it’s performed by somebody like Lizzy.” says Solomon. Being able to give as good as she gets was essential for fitting into the mostly male cast. “Lizzy throws a new element into this mix, because she can hit right back at them,” says Chu. “She’s dirtier than all of them put together.”

Returning for a sequel is like working in Repertory Theater, says Freeman, a veteran stage actor. “You work with a group of people over a period of time and develop a comfort level in terms of rhythm and trust. We all came back together, and we know who we are, not just from having worked together before, but because we’ve seen the finished film and we know what we did right.”

After starting out in New York City, where the first film left off, the action of Now You See Me 2 soon becomes international as The Horsemen are transported to Macau, seemingly by magic, then on to London for a final showdown with an unexpected alliance of enemies.

For Chu, the bright, busy seaport of Macau was the perfect place to set many of the film’s central scenes. “From the very beginning, we knew we wanted to take the Horsemen to a place where mystery and magic are woven into the history,” the director says. “Macau is an exotic, beautiful, strange mix of Portuguese architecture and Chinese culture, with Las Vegas thrown in for good measure. Everywhere you point the camera is gorgeous. The feeling and the texture of the place embody the spirit of what this movie is about.” For that reason, it was essential to Chu that the exterior scenes be shot on location.

One of the world’s wealthiest cities, Macau lies on a peninsula attached to mainland China, but has more in common with Hong King, another former European colony that lies less than 50 miles off the coast. Part of the People’s Republic of China since 1999, Macau was colonized by the Portuguese in the 16th century.

In the U.K., where the bulk of filming was done, locations included the Royal Observatory in historic Greenwich, which marks the prime meridian — the longitudinal zero-degree line, and the Tilbury Docks in the Port of London. Atlas’ mind-bending, rain trick was filmed at the Royal Navy Academy in Greenwich and Lula’s breathtaking magic stunt takes place in front of the famed British clipper ship, the Cutty Sark, one of the last tea clippers to be built before the advent of steam ships.