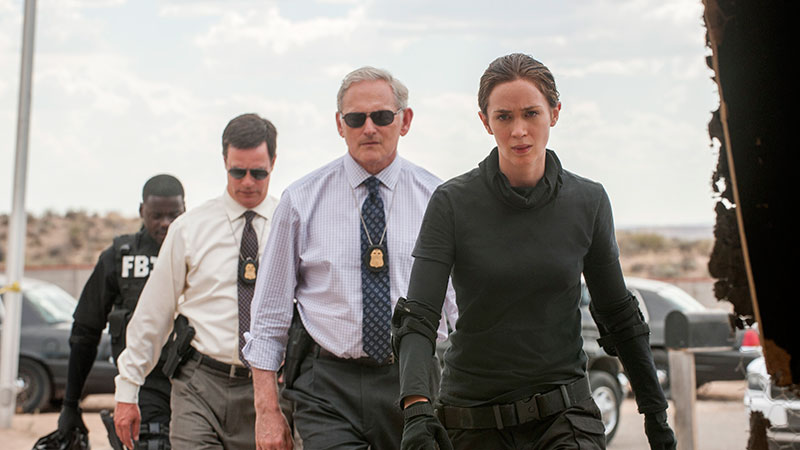 In the lawless border area stretching between the U.S. and Mexico, an idealistic FBI agent [Emily Blunt] is enlisted by an elite government task force official [Josh Brolin] to aid in the escalating war against drugs. Led by an enigmatic consultant with a questionable past [Benicio Del Toro], the team sets out on a clandestine journey forcing Kate to question everything that she believes in order to survive. 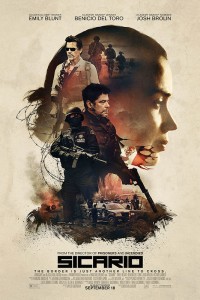 For screenwriter Taylor Sheridan, a native Texan who grew up traveling south of the border when it was still common to do so, delving into this reality was a personal lure. With the probing heart of a writer, he felt called to return to his roots to explore what had become forbidden zones over the last decade. He saw that the alluring cross-cultural border of his youth had disappeared.

“I realized that Mexico doesn’t exist anymore, the Mexico someone could just drive down into is gone. It’s become this lawless place,” says Sheridan. “At the same time, I realized I hadn’t seen any movies about how life in northern Mexico has changed, how it has become dominated by drugs and corruption.”

Sheridan started by poking around sun-seared, dusty border towns in the cactus-splattered Chihuahua Desert. At first he got a lot of radio silence. “I went all along the border. There is no interviewing cartel members, no interviewing government officials. The only way in was to gain the trust of the people who are most affected by it – the migrants.” Slowly, a story began to emerge about a side of the war on drugs few ever have seen in the U.S. — the story of a war on drugs that often, in practical terms, becomes a war for drugs, as the powers that be jockey for control of the trade.

The question that loomed now was how to find a director with the fearlessness, not to mention the gripping visual style, to really go after this story’s sharpest edges? “That person was Denis Villeneuve.” Says Thunder Road founder and producer Basil Iwanyk. Villeneuve felt an instant affinity for the material, but his aim was to leave judgment out of it, allowing the audience to decide whether the methods used by the blacks-op team are worth it in the end.

Iwanyk approached Black Label Media (BLM) founders Molly Smith, Thad Luckinbill, and Trent Luckinbill to partner as producers and become the movie’s financiers. They saw the story as bringing something new to the classic conspiracy thriller.

Screenwriter Sheridan imagined the charismatic Puerto Rican-born actor Benicio Del Toro taking the role of Alejandro even as he was writing. Del Toro says that complexity gripped him. As with Alejandro, casting the role was crucial. The filmmakers sought someone who could tackle major FBI action. “We needed an actress who could authentically portray an FBI agent yet would also be a very relatable person,” comments director Villeneuve.” Those qualities were wrapped up in Emily Blunt. Villeneuve loved watching the chemistry between Blunt and Del Toro come to a simmer.

The next crucial casting task was finding the operative who brings Kate into the black-ops mission for his own reasons: easygoing but secretive Matt Graver. When he received the script, Josh Brolin had just come off making the movie Everest. “I had just done this very intense movie, and I had it in my blood to want to keep going further into intensity,” says Brolin of why he instantly responded to Sicario.

Though Juarez’s murder rate has dropped since 2012, the city remains one of the riskiest on earth for journalists and probing outsiders, and new cartels are on the rise. So how was a major motion picture going to penetrate the treacherous realities of this world? It was not easy. Even the location scout was more like a military mission.

While the production did not shoot on the streets of Juarez, the production did shoot over Juarez and the landscape we are seeing in the film is the real Juarez City. Most of the filming took place in Albuquerque, New Mexico; El Paso, Texas; and Veracruz, Mexico. Villeneuve became fascinated with the borderland terrain, setting out to capture the harsh, bone-dry, yet lyrical essence of the badlands – a landscape that seems to mirror what Kate is going through. He brought in a group of trusted collaborators to bring the visuals to life, including 11-time Academy Award® nominated cinematographer Roger Deakins, Oscar® nominated production designer Patrice Vermette and costume designer Renée April, whose works spans from the realism of Prisoners to the wild fantasy of Rise of The Planet of the Apes.