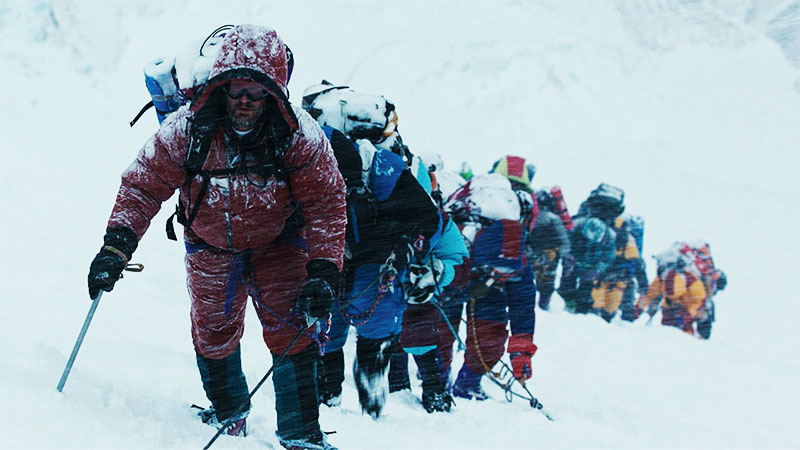 Inspired by the incredible events surrounding an attempt in 1996 to reach the summit of the world’s highest mountain, Everest documents the awe-inspiring journey of two different expeditions challenged beyond their limits by one of the fiercest blizzards ever encountered by mankind. 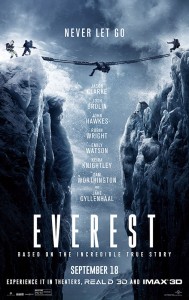 The South Tyrol area of the Italian Alps provided a fantastic, dramatic landscape to double for Everest, though it did present the cast and crew with many challenges, including working at a high altitude with wind chill temperatures as low as -30°C.

Working Title producer Tim Bevan first became interested in the story when he read Jon Krakauer’s “Into Thin Air” soon after it was published in 1997. Krakauer, a journalist who had been part of Rob Hall’s Adventure Consultants team on the mountain  that May, had first documented the events for an article in Outside magazine. Bevan’s producing partner, Eric Fellner, shared his enthusiasm for the project; they discovered that Universal Pictures, with which Working Title has a long-term distribution agreement, coincidentally owned other properties relating to the events. These included Beck Weathers’ “Left for Dead: My Journey Home from Everest,” from which the film draws inspiration, as well as the transcript of the final satellite phone conversation between Rob Hall and his wife, Jan Arnold.

While it had looked as if the movie was going to be made earlier in the ’90s with director Stephen Daldry in charge, it wasn’t until 2011 that the elements finally started to come together to bring this story to the big screen. Blockbuster film screenwriters William Nicholson and Simon Beaufoy worked to deliver a deeply moving and powerful script, while advances in visual effects meant it would be possible to capture the jaw-dropping conditions that day without putting the cast or crew at risk. It was at this point that Bevan and Fellner began communicating with director Baltasar Kormákur, who was in Los Angeles shooting Working Title’s action-thriller Contraband.

Kormákur immersed himself in discovering what happened that day on the world’s highest mountain, recognizing the immense challenges of the project, both emotionally and physically. As he worked with his fellow producers and with the writers, Kormákur insisted that they shape the film’s story in a way that respected all concerned. It was of paramount importance that they honor those eight people whose lives were lost on the mountain that May, and to tell a balanced story without looking to justify or criticize any of the decisions made before or after the ascent and descent.

Co-producer Breashears has been working with Working Title on the project for more than a decade and served as a consultant, advising on climbing and filming in Nepal. When the 1996 tragedy unfolded, he was on the mountain co-directing and co-producing what would become the beloved 1998 IMAX film Everest. In turn, Breashears was able to instruct cast and crew in exactly what conditions were like. Also helping to translate these events to the screen is Guy Cotter, the Key Alpine Adviser on the project, who now runs Adventure Consultants and helped coordinate rescue efforts for his friend Rob Hall on the day he died.

Australian actor Jason Clarke, best known for his leading roles in Dawn of the Planet of the Apes and the award-winning Zero Dark Thirty, plays New Zealander Rob Hall, an incredibly well-regarded climber who discovered mountaineering while he was growing up near the Southern Alps on the South Island. Like so many, Clarke was keenly aware of the tragic events long before the filmmakers approached him to play Hall and was honored to take on the role.  Kormákur, who was an actor early in his career, acknowledges that Hall is not a particularly easy character to play.

Of course, film shoots are always challenging, but work on Everest surpassed the exhaustions of most, as the cast and crew boarded an epic production that became an expedition of its own. With unit shoots in locations as far afield as Nepal, the Italian Alps, Cinecittà Studios in Rome and Pinewood Studios in the U.K., the challenges of filming this epic-adventure exceeded all expectations.

The film’s schedule was ambitious, beginning on January 14, 2014, with a reduced unit starting principal photography in Kathmandu. Scenes were shot at altitudes of 16,000 ft., giving the cast an acute sense of the challenges of life at high altitudes.