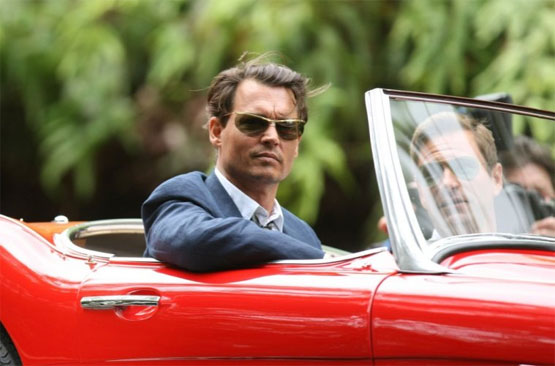 The Rum Diary is a  film based on the novel of the same name by Hunter S. Thompson. The film is directed by Bruce Robinson and stars Johnny Depp and Amber Heard. Filming began in Puerto Rico in March 2009. It is set to be released on October 28, 2011. 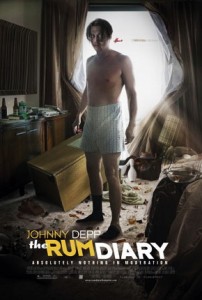 The Rum Diary tells the increasingly unhinged story of itinerant journalist Paul Kemp (Johnny Depp). Tiring of the noise and madness of New York and the crushing conventions of late Eisenhower-era America, Kemp travels to the pristine island of Puerto Rico to write for a local newspaper, The San Juan Star, run by downtrodden editor Lotterman (Richard Jenkins). Adopting the rum-soaked life of the island, Paul soon becomes obsessed with Chenault (Amber Heard), the wildly attractive Connecticut-born fiancée of Sanderson (Aaron Eckhart). Sanderson, a businessman involved in shady property development deals, is one of a growing number of American entrepreneurs who are determined to convert Puerto Rico into a capitalist paradise in service of the wealthy. When Kemp is recruited by Sanderson to write favorably about his latest unsavory scheme, the journalist is presented with a choice: to use his words for the corrupt businessmen’s financial benefit, or use them to take the bastards down.

Hunter S. Thompson wrote the novel The Rum Diary in 1961, but the novel was not published until 1998. The independent production companies Shooting Gallery and SPi Films sought to adapt the novel into a film in 2000, and actor Johnny Depp was signed to star and to serve as executive producer. Nick Nolte was also signed to star alongside Depp. The project did not move past the development stage. During this stage, Hunter S. Thompson became so frustrated as to fire off an obscenity-laden letter calling the process a “waterhead fuckaround”.

In 2002, a new producer sought the project, and Benicio del Toro and Josh Hartnett were signed to star in the film adaptation. The second incarnation also did not move past the development stage. In 2007, producer Graham King acquired all rights to the novel and sought to film the adaptation under Warner Independent Pictures. Depp, who previously starred in the 1998 film adaptation of Thompson’s novel Fear and Loathing in Las Vegas, was cast as the freelance journalist Paul Kemp. Amber Heard is reported to have won the role out over Scarlett Johansson and Keira Knightley.

Bruce Robinson joined to write the screenplay and to direct The Rum Diary. In 2009, Depp’s production company Infinitum Nihil took on the project with the financial backing of King and his production company GK Films. Principal photography began in Puerto Rico on March 25, 2009. Composer Christopher Young has signed on to compose the film’s soundtrack.