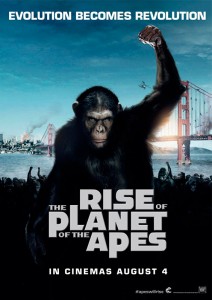 Rise of the Planet of the Apes is set in present day San Francisco, where man’s own experiments with genetic engineering lead to the development of intelligence in apes and the onset of a war for supremacy.

James Franco plays Will Rodman, a scientist at the Gen-Sys Corporation, whose father Charlie (played by John Lithgow) is suffering from Alzheimer’s so he starts to develop a smart drug that he tests on a chimpanzee named Bright Eyes. She has a baby named Caesar that Will notices is smarter than other chimps around him, and that intelligence seems to be growing by leaps and bounds but not having support from his bosses, Will takes Caesar home with him and shelters him there. His girlfriend Caroline (Freida Pinto ) helps him take care of Caesar as well as convinces him to take Caesar to a primate shelter where apes are mistreated, so Caesar ultimately revolts and leads other apes to do the same.

James Franco was cast after talks with former co-star Tobey Maguire broke down.Freida Pinto and John Lithgow joined the cast on June 22, 2010.Peter Jackson’s Weta Digital will be providing the simian actors, including Andy Serkis (Lord of the Rings’ Gollum) as lead-ape, Ceaser, the ape that leads the revolt. Tom Felton will also star as the human character Dodge. As of July 12, 2010, Brian Cox was in final negotiations to join the cast. According to his Twitter page, David Hewlett has also joined the cast, though he has not mentioned what his role in the film will be. Canadian actress Chelah Horsdal will also star as Irina.

Unlike previous films in the series, the apes in the film will be created digitally using CGI technology, by Weta Digital. The Oscar-winning visual effects team that brought to life the worlds of “Avatar” and “Lord of the Rings” is breaking new ground, creating a CGI ape that delivers a dramatic performance of unprecedented emotion and intelligence, and epic battles on which rest the upended destinies of man and primate.