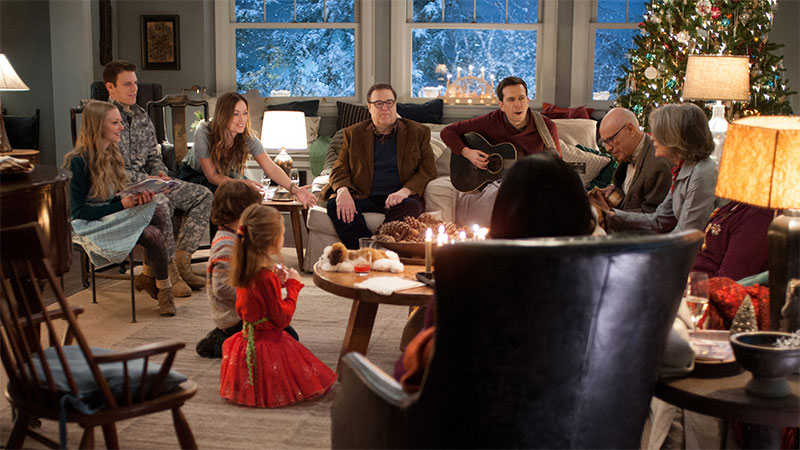 Charlotte Cooper (DIANE KEATON) has one simple holiday wish…for her family to have thememory of a perfect Christmas. But four generations of the Cooper clan gathering under the same roof is anything but perfect. Comfort and joy won’t come easy -a ton of snow will fall, food will fly and unexpected guests will join. But first, the Ghosts of Christmas Past, Present and Future will rear their heads as each of the Coopers makes the trip home… 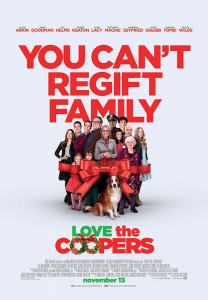 Nelson says she auditioned a lot of dogs for the role of Rags. Bolt was named after the Olympic runner Usain Bolt. He was born in the summer of 2008 during the Summer Olympics. He is part St. Bernard (his mother’s side) and part Australian Shepherd (his father’s side). According to his trainer Gary Mui, Bolt was born at an animal park in Osaka, Japan.

Producer Michael London (The Family Stone) says Director Jessie Nelson fell in love with the Coopers from the moment she read Steven Rogersoriginal script. “They became family to her and she brought them to life as if she were related to all of them,” he says.

Much of the movie really centers on “time,” says Screenwriter Steven Rogers. “People spend a lot of time dwelling on the past or being upset about the past, whether it is something someone else did or something they did or worrying about the future, and they miss out on the present. It’s very generational.”

London says Keaton became involved in the production “early, as both an actress and an executive producer. Diane is the linchpin of the Cooper family and the linchpin of our cast,” he notes. “When you have an actress of Diane’s caliber in the film, it’s much easier to build a great cast. John Goodman was the next key piece. ” And to have John Goodman play her husband of 40 years was truly a joy. “I had seen Inside Llewyn Davis and he BLEW MY MIND. He is deceptively brilliant. He is a consummate actor.”

Of his character Hank, Ed Helms says the father of three is out of work and going through a tough time. He is in the midst of adjusting to his divorce from his wife Angie (ALEX BORSTEIN). Olivia Wilde, who plays Hank’s sister Eleanor, loved the script as well. “I was really taken by how sentimental the script made me feel. I laughed, of course, but I got really weepy by the end,”
she says.

To say preparing Christmas Eve dinner at the Coopers was a Herculean feat would be a gross understatement. Just ask the filmmakers and Melissa McSorley, the film’s food stylist who cut her expertise on the sumptuous cuisine of the hit Chef – an effort so enticing that Director Jessie Nelson
knew she had to have her onboard. McSorley says Nelson told her the food should be “Martha Stewart-ish with a homemade feel and relatable to everyone. Say, like a green bean casserole at the holidays, but not the one your grandma made with cream of mushroom soup.” Although the menu was pulled together in advance, only the dump salad was scripted, she says.

The Coopers’ house is a timeless touch point for all, a place where memories are made and always reclaimed. When Production Designer Beth Rubino and Nelson met to discuss the Coopers’ home, they met on common ground. “Current. Homey. Nostalgic. Accessible to everyone,” Rubino explains.

A Love the Coopers soundtrack, released by Republic Records, will be available in November timed to the film’s release.