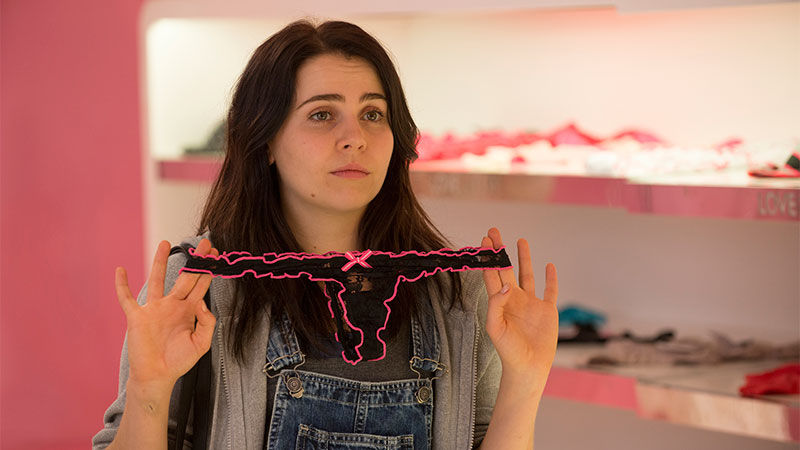 Bianca (Mae Whitman) is a content high school senior whose world is shattered when she learns the student body refers to her as ‘The DUFF’ (Designated Ugly Fat Friend) to her prettier, more popular friends (Skyler Samuels & Bianca Santos). With her universe turned upside down, she ignores words of wisdom from her favorite teacher (Ken Jeong) and enlists Wesley (Robbie Amell), a slick but charming jock, to help set her apart from the pack and erase her label forever. 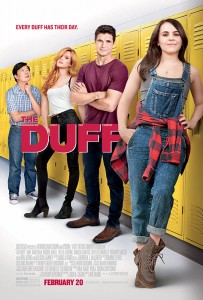 During an outing to an Atlanta Braves game, the cast was caught on the Jumbotron’s “hug cam” and “dance cam” and took time to talk to fans. Amell took a behind the scenes tour and dove with the whale sharks at the Atlanta Aquarium.

Executive Producer Lane Shefter Bishop first learned of the novel THE DUFF when she saw the partially written book in the office of Joanna Stampfel-Volpe, a book agent in New York. Bishop instantly loved the title and the idea, and read the book that night. The next day, she called
Stampfel-Volpe and asked for the chance to secure a movie deal. Bishop immediately sent the project to producers McG and Mary Viola of Wonderland Sound and Vision and said, ‚You have to read this now!‛

As much as the producers loved the book and the characters at the heart of the story, they needed to put it in a film structure and adjust certain aspects to make it work visually for an audience. They enlisted screenwriter Josh A. Cagan (Bandslam). “ Sometimes while condensing a book, you have to lose certain things and change others but we stuck with the elements that were the most important and integral to telling the story,” says Viola.

CBS Films received a first draft of the script on spec. They called the next day to tell the producers they wanted to make the movie. As the studio developed the script with the producers and Cagan, everyone wanted to make sure that Keplinger and her legion of fans were happy with the direction the film was taking. They sent the book author, Kody Keplinger the script. “We were ecstatic to find out that Kody was delighted with the story and that she understood we had to change around some things,” says Viola. “She completely got it.”

McG and Viola had previously worked with the film’s director Ari Sandel. “Ari directed the second season of Aim High for us. We said if we ever get the chance to make a movie with this guy, we are going to do it,” says McG. For Sandel, the opportunity to make a teen comedy (a genre that he has long admired) was one he couldn’t pass up.

To fill the role of the pivotal and titular DUFF a.k.a. Bianca Piper, producers turned to the young but experienced film and TV actress Mae Whitman, who unbeknownst to them at the time of casting, was Keplinger’s choice for the role. Whitman hadn’t heard of the term DUFF before she was given the script. But as soon as she read it, she thought it was an important story to be told and one that spoke to her personally. “The story is important to me because I’ve grown up in this industry and have had to struggle with being put in certain categories my whole life,” says Whitman. “Being an actress you get put into a category and you are like, ‘I don’t feel that is the way I am, but is it?‘”

For the role of Wesley Rush, producers had to find someone to play the quintessential handsome jock who has been categorized as dumb and shallow. The producers found Canadian-born actor Robbie Amell to portray this surprisingly complex guy. Amell had concerns about making a teen comedy until he read the script. “I feel like he’s an old weird dude in a popular young kid’s body,” says Amell.

To film The DUFF, CBS Films chose to return to Atlanta where the studio had a great experience shooting interiors for their recent hit Last Vegas. In addition to Henry W. Grady and Marietta High Schools, other locations used in the metro Atlanta area include Perimeter Mall, the Cobb Energy Performing Arts Centre, Stone Mountain Park, and Dave and Buster’s (a restaurant, bar and game venue). The party scene at Morgan’s house was filmed at a mansion in Atlanta’s upscale Buckhead area while homes in the regentrified neighborhood of Kirkwood were stand-ins for Bianca’s, Robby’s and Nick’s houses.