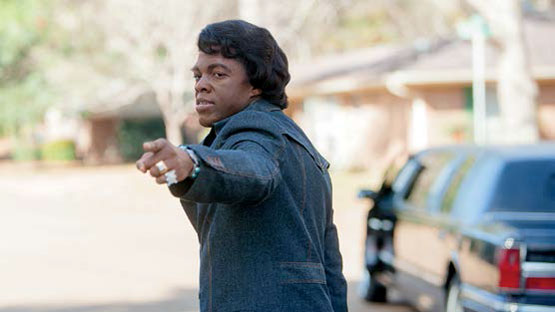 You know him by many names: “Mr. Dynamite,” “The Godfather of Soul,” “The Hardest Working Man in Show Business.” But now get to know the man behind the legend. Born dirt-poor in South Carolina in the middle of the Great Depression in 1933, James Brown survived a young life of abandonment, abuse, reform school, jail. Nobody ever taught him the rules. 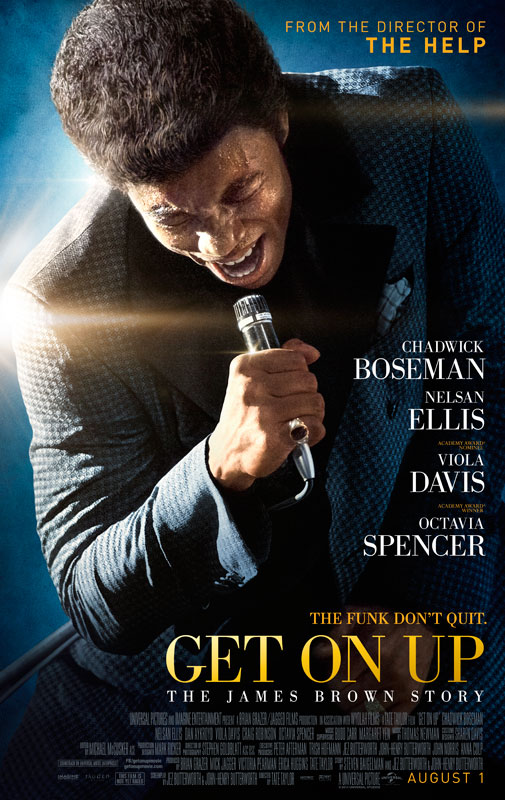 On December 23, 2006, James Brown fell ill unexpectedly and died two days later, at the age of 73. His death was marked with a funeral procession that traveled through Harlem and ended at the Apollo Theater, where he’d made history recording his self-financed “Live at the Apollo” album in 1962.

Courting Brown for the film rights was a lengthy process. When an agreement was finally reached, Academy Award winning producer Brian Grazer commissioned several writers to work on a script. With a final draft in hand from English playwrights Jez Butterworth and John-Henry Butterworth, with a story by the Butterworth brothers and Steven Baigelman, he was ready to hire a director.

The film rights that Grazer had worked so long to acquire reverted to the James Brown Estate, and the biopic was at a standstill. In time, the estate needed someone to oversee those rights, and chose Peter Afterman to serve as its arbiter. Afterman, who has also handled music licensing and visual media for The Rolling Stones since 2009, believed that Stones frontman Mick Jagger was just the man to reignite the fire that was the James Brown story.

Jagger has, in his own right, changed the landscape of music over the course of the past half century. But that’s only half of his story. In addition to his work producing features and television, the storyteller had recently finished those duties on two documentaries, Stones in Exile and Crossfire Hurricane, and was open to developing a new project with his longtime Jagged Films partner, Victoria Pearman.

When Jagger was approached by Afterman about producing a documentary on Brown—one ultimately directed by Alex Gibney and previewed as a work in progress at the 2014 Tribeca Film Festival—he discussed with Pearman that he was keen to explore the untold story of a man he emulated and about whom he actually has firsthand knowledge. Recalls Jagger: “Then I woke up in the morning and I said, ‘Well, that’s great. But why don’t we do a feature film? I could do the documentary as well, but can we do a feature?’”

The time had come, again, to think about directors, and this time, things moved faster than anticipated. Relays producer Victoria Pearman: “We wanted the person most compatible with the material naturally.”

Imagine was already interested in director Tate Taylor for another project, and the production company had invited the Mississippi native to its office to discuss that possibility. “We loved The Help,” Grazer explains. “Tate had made a difficult subject palatable and beautiful, and it was very successful.” When that meeting ended, Taylor was on his way to the elevator when Imagine executive Anna Culp happened to mention the James Brown script. “I was leaving town that day and asked to read it on the plane,” Taylor recalls. “Somewhere over Las Vegas, I turned to my producing partner, John Norris, and said, ‘I know how to do this.’”

The Get on Up team would grow to include people who knew the man well, such as nephew Darreb Glenn, in the music department, and grandson Jason Brown, a production assistant. Both men were on hand for reality checks, and also appear in the film. “Octavia Spencer is playing my grandmother,” says Glenn. “Viola Davis is playing my aunt. My dad’s a character, too [Big Junior], so everybody’s come to me to get a little piece of how they were. I’m happy to share because we want to get it right.”

Among the many qualities Taylor hoped to find in the actor who would play James Brown in Get on Up were Southern country roots—the kind found in people born into a hardscrabble life in 1933’s Barnwell, South Carolina. Chadwick Boseman has those roots, and much more, including a deep work ethic.In his starring role, Boseman embodies Brown’s charisma, drive and musical genius. With countless hours of hard work, he’s also mastered the man’s incredible moves.

That Get on Up is a story with Southern roots meant a lot to Taylor. That he could film in his native Mississippi meant a great deal, too. In the Magnolia State, he knew he had a seldom-seen canvas where he could re-create locations ranging from Harlem’s Apollo Theater to Vietnam. Beyond that, there was the vibe.

In November and December of 2013, the Get on Up shoot was based in Natchez, a small city on the banks of the Mississippi River. After the year-end holidays, the filming unit moved two hours north to Jackson, the state capitol and Taylor’s hometown.