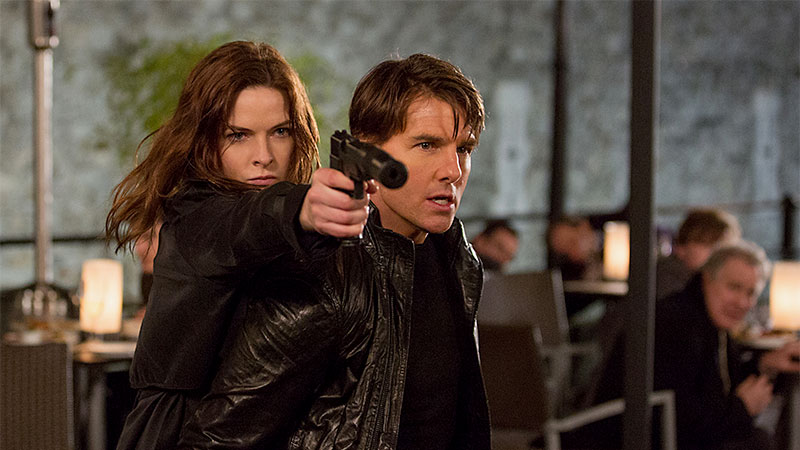 Tom Cruise is back as Ethan Hunt, facing his most blisteringly impossible mission yet, in “Mission: Impossible – Rogue Nation,” the fifth installment in the constantly accelerating action-thriller series. 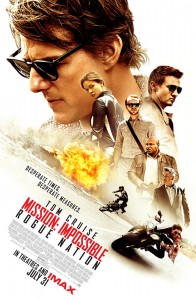 Many people thought the film’s opening stunt was so outrageously impossible, it could only be created digitally.  But true to the “Mission: Impossible” spirit, the stunt was pulled off 100% live, giving the audience a wild ride that cannot be imitated.

For Cruise, a fifth time playing Hunt and serving as producer presented another chance to see just how far he can take the character, and the entire genre of sophisticated global espionage games.  He loves moving the bar, often hurling the bar, with each new “Mission: Impossible” film.

In his bid to continue the series’ reputation not only for blending genres but also for innovation and visual pizzazz, it was Cruise who wanted to bring in director Christopher McQuarrie – with whom he worked as a screenwriter on “Valkyrie” and “Edge of Tomorrow” and as a director on “Jack Reacher” — for the first time. “Chris has an incredible mind. He’s an extraordinary writer and an extraordinary filmmaker and to see his sensibility applied to this genre is something I was excited about,” Cruise summarizes.

Says McQuarrie:  “I wanted this film to pull together the Dream Team of ‘Mission: Impossible’ and give all the members of the IMF a major role.  Each of the four movies so far has had a different team dynamic — but for this one, I wanted to reach back into the franchise to bring back the best of them all to create a kind of supergroup of players … ”

To play Ilsa, the femme fatale who reverses the tables on Hunt, the filmmakers chose a relative unknown:  Rebecca Ferguson, who hails from Sweden, and was recently seen in “Hercules.”  She won the role in part because she was a total surprise, says Christopher McQuarrie. “When I first saw Rebecca on tape, she was 180 degrees from what I thought I was looking for.  But Tom and I just looked at each other and said, ‘that’s her.’” With no time to lose, Ferguson recalls that she had to throw herself into training with all she had. “It was six hours a day and six days a week of stunt rehearsals, learning the specifics of hitting, ducking, jumping and moving,” she describes.

Also joining the “Mission: Impossible” franchise for the first time is Oscar® nominee and Golden Globe and Emmy winner Alec Baldwin – bringing his sly gravitas to officious CIA head Alan Hunley.  Cruise was gratified to have the chance to bring Baldwin into the “Mission: Impossible” world.  Baldwin got a kick out of working with Cruise in the dual capacities of co-star and producer – and being initiated into the hectic, non-stop action of a “Mission: Impossible” shoot.  “Tom the producer is almost identical to Tom the actor:  very vigilant, very hands-on,” Baldwin describes.

The most shadowy newcomer to “Mission: Impossible – Rogue Nation” is the most dastardly archenemy the franchise has seen:  Solomon Lane, the former British spy who has turned to the dark side of espionage. Once again, the filmmakers sought someone unexpected.  They cast Sean Harris, best known for his role as a crewmember of an alien-threatened spacecraft in Ridley Scott’s “Prometheus,”

No one was surprised that Cruise refused to rest on his laurels when it came to the action.  Jokes J.J. Abrams:  “I think one of the hardest things about doing any ‘Mission:  Impossible’ movie is just trying to convince Tom not to literally do every possible life-threatening stunt, because he just will go to that place.”

A proud tradition of “Mission: Impossible” is spanning the globe and utilizing a series of awe-inspiring international landmarks as set pieces.  “Mission: Impossible – Rogue Nation” continues that with a sequence at the Vienna State Opera House, the ornate Renaissance-era building in the heart of one of Europe’s most architecturally rich cities.  Shooting there was a dream come true for Tom Cruise.

Composer Joe Kraemer also joined the team, having worked with McQuarrie and Cruise on “Jack Reacher.”  “I loved his score for ‘Jack Reacher,’” says Cruise, “and he and Chris have been great friends and collaborators.  And I love what he did with the music, particularly the opera sequence, which I think is really exceptional. He has designed the music to fit beautifully with the edit.”