X-Men: First Class is an American superhero film, directed by Matthew Vaughn, based on the characters appearing in Marvel Comics. The film is the fifth installment of the X-Men film series and a prequel to the first three movies. 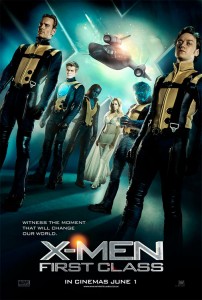 In X-Men: First Class, Charles Xavier and Erik Magnus Lensherr met as young men in the 1960s at Oxford University. Before they were archenemies, they were closest of friends, working together, with other Mutants, to stop the greatest threat the world has ever known.

The film, set during the 1960s, will focus on the relationship between Professor X and Magneto and the origin of their groups, the X-Men and the Brotherhood of Mutants. The film stars James McAvoy as Professor X and Michael Fassbender as Magneto. It also stars Kevin Bacon as Sebastian Shaw, the antagonist of the movie. Other cast members include January Jones, Rose Byrne, Jennifer Lawrence and Lucas Till. The film is mostly being shot in England and parts of the United States. Fox envisions this film as the first in a new trilogy.

The film is a prequel to the first three movies, set during the 1960s, with John F. Kennedy as president of the United States. X-Men: First Class parallels the history of Martin Luther King, Jr. and Malcolm X. The villains of the film will be the Hellfire Club. The cast is as follows: Starring: James McAvoy, Michael Fassbender, Rose Byrne, January Jones, Kevin Bacon, Nicholas Hoult, Jennifer Lawrence, Caleb Landry Jones, Lucas Till, Edi Gathegi, Jason Flemyng, Oliver Platt, Morgan Lily, Zoe Kravitz, Bill Bilner. Hugh Jackman reprises his role as Wolverine in an uncredited cameo in a bar.

In April 2006, one month before the release of X-Men: The Last Stand, writer Zak Penn revealed he was contracted to write and direct a spin-off. He later explained in 2007 that “the original idea was to have me do a young X-Men spin-off, a spin-off of the young X-Men characters. But someone came up with a pretty interesting idea […] it was this guy who worked with me named Mike Chamoy, he worked a lot with me on X3. He came up with how to do a young X-Men movie which is not what you’d expect.”

Penn compared the idea to the comic book series X-Men: First Class, and Josh Schwartz was writing the screenplay in May 2008. Schwartz’s writing assignment also included the possibility of directing of X-Men: First Class, but Fox approached Bryan Singer, director of X-Men and X2, in October 2009. The original idea was to green-light the film depending on the success of X-Men Origins: Magneto, but Singer added elements of the Magneto spin-off, merged into a new script by Jamie Moss. In addition to Moss, Ashley Miller and Zack Stentz were hired to rewrite the script. Miller compared it tonally to Singer’s work on the first two X-Men films.

Singer dropped out of the director’s position in March 2010 due to his commitment to a Jack the Giant Killer adaptation. He formalized his duties from director to producer. Matthew Vaughn signed on as Singer’s replacement in May 2010. With his hiring, Fox announced a June 4, 2011 release date, and Jane Goldman was hired for another rewrite. Vaughn wanted to model X-Men: First Class after the 2009 Star Trek film, taking the franchise in a new direction with a fresh, young cast. An action scene that was to have been set in a dream sequence with revolving rooms was scrapped after the release of Inception. The 1960s setting of X-Men: First Class will be technologically inspired by the James Bond films of that era, also adding to the international feel of the characters. The X-Men costumes will look much more as they did in the original comics compared with the first three films.