When Louisa Clark—Lou, as she’s known—unexpectedly loses her waitressing job she must scramble to replace the income that her tight-knit family depends upon. Desperation drives her to take a job as a caregiver to Will Traynor, a man who used to be a wealthy banker with an adventurous soul, living life to the very fullest, but for whom those days are in the past. 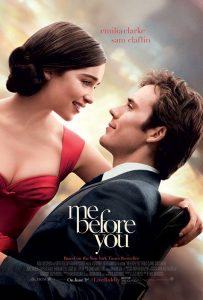 The exterior of the Clark house and street was filmed in Harrow in London. A private home in Esher, Surrey, doubled as the site for Dignitas in Switzerland, and historic Sandown Park in Esher was the location used for a sequence at the horserace, in addition to an airport check-in area. Sandown Park, opened in 1875, still operates today, and was one of the first racecourses in England to charge admission to all who attended.

“At its most basic, this is a story about the power of love and how it transforms you,” says director Thea Sharrock.

Lou and Will’s uniquely romantic tale was crafted for the screen by Jojo Moyes, based on her own bestselling novel. “It’s a bit of a dream for me, the idea that this story is going beyond the book to the screen,” Moyes offers. “Having watched what it’s become through the actors’ performances and Thea’s wonderful direction, I can say that people who see the movie will get the same story and characters, but also get something quite different out of it. Audiences bring their own experiences, hopes and fears, and I think they will truly be taken out of themselves and into Lou and Will’s world.” Sharrock adds, “Jojo has carried these characters, Lou in particular, with her for a long time, so it was especially important to me that we get it right.”

“Thea is a very respected theater director in the UK, and I had seen her television work—very traditionally British—so when I met her I expected a proper English woman to appear,” recalls producer Karen Rosenfelt, smiling. “Instead, she plopped down in an overstuffed armchair, swung her legs over the side, and over the next hour we had a wide-ranging general discussion about film, theatre, books. We then turned to this project, and it went from there. I loved her humanity, her accessible sophistication, and that she was instantly right at home with me and with the material.”

Emilia Clarke, who stars as the wide-eyed, endearing Lou, says, “What drew me to this movie were the words of Jojo Moyes, the book first and then the script. I was hooked on page one and so excited to play a character with such charm and sincerity, who is so authentically and brilliantly British, and with such a lovely arc in her story.”

To find an actress who could play positive under pressure, the filmmakers cast a wide net. “We saw hundreds of girls, and I had Skyped with Emilia about the role, but I can honestly say that when she walked in to audition and did her first scene, it was literally like Lou Clark was in the room,” Sharrock recalls. “I remember secretly texting Karen Rosenfelt and all I said was, ‘We found her.’ There was no question. Her energy was exactly right; like Lou, she was just a breath of fresh air.”

Clarke had an easy rapport with the first-time feature director. “Thea is just the greatest, I love her. You’d never, ever, know that this was her first film,” she declares.

Sam Claflin, starring alongside her as Will, was equally pulled into the material. “The writing itself was so beautifully done, and the subject matter surrounding this very challenging character was handled so well, it really got me thinking. That was a big draw for me.” To portray Will, the actor would only be permitted movement from the neck up and in one finger and thumb. Part of Claflin’s transformation to Will included losing weight—a total, he says, of “over three stone” (more than 40 lbs)—because the character’s immobility over two years would have naturally induced muscle loss.

As with any film romance, one of the most critical elements was the chemistry between the romantic leads. “Once we had whittled our candidates down in the casting process, we brought the finalists in to read together,” the director says. “That was the decider. As soon as Sam and Emilia met, the casting director and I looked at each other and knew we’d found the right pair.”

Though Will was presumably very social at one time, the only mainstay in his life when Lou comes along, apart from his parents, is his nurse/occupational therapist, Nathan. Amidst a solidly British cast, Aussie actor Stephen Peacocke plays the role. To aid both Peacocke and Claflin in preparing for their characters’ interactions, Peacocke says, “We had some lovely occupational therapists come in to help us, Ruth Peachment and Gaynor Willmoth.”

Rounding out Lou’s hometown life are Lou’s father, Bernard, played by Brendan Coyle; her mother, Josie, played by Samantha Spiro; her sister and closest confidante, Katrina (aka Treena), played by Jenna Coleman; and the girls’ granddad, played by Alan Breck.

From Will’s former life, we meet Alicia, his one-time girlfriend played by Vanessa Kirby, and Rupert, his former colleague and friend, played by Ben Lloyd-Hughes. And fans of British comedy will enjoy a cameo from “Absolutely Fabulous” star Joanna Lumley, who plays a memorable guest at a wedding Lou attends with Will.

“Me Before You” is set almost entirely in England and was shot almost entirely there as well. The town of Pembroke in Wales stood in for much of the local town where the Traynors live in grandeur in a castle atop the hill, and where the Clarks live in cozy, if far less spectacular, surroundings. Scenes featuring Lou working at The Buttered Bun Café were accomplished there, as were exteriors for Will’s family home, which was actually Pembroke Castle. The castle’s beginnings date back to 1093 and it’s renowned as the birth place of King Henry VII.

Whytham Abbey, a private manor house in Oxfordshire, represented Grantchester House, the Traynor family home within the castle walls. All of the exteriors immediately around the house and the interior of the main house were shot there and McAlpine created an atmosphere suitable for the reserved, wealthy family.

Despite the many splendors of the English countryside the story called for, it’s when Lou and Will embark on a romantic holiday that the scenery becomes truly exotic. A portion of the Spanish island of Mallorca stood in for the French island of Mauritius called for in the script. Several scenes were also shot on the grounds of the Barceló Formentor Hotel and along the property’s adjoining beach.