Add to the list of puckish rogues, charming ne’er-do-wells and sly adventurers played by Johnny Depp the role of Charlie Mortdecai, cash-strapped British aristocrat and protagonist of the new action-comedy Mortdecai. Based on the charismatic anti-hero of Kyril Bonfiglioli’s popular trilogy, Charlie Mortdecai is a professional bon vivant and occasional art dealer perpetually at the end of his financial rope. 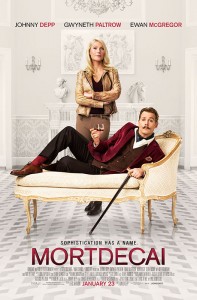 The iconic Goya painting intrinsic to the storyline was created specifically for the film.

Production designer James Merifield, an Emmy® Award winner with credits including the acclaimed British television series Little Dorrit was drawn to what he saw as a strong retro feeling in the writing of Mortdecai. “That was something I wanted to springboard into the design,” he recalls. “We should hark back to the style of movies in the 1940s and 1950s. When it became apparent that director David Koepp felt the same way, we designed Mortdecai Manor with quite a few references to that era.”

Merifield says he approaches his designs through character and found a wealth of inspiration in Mortdecai. Wrotham Park in the English countryside became Mortdecai Manor, the fictional English country estate that Charlie and Johanna call home. Technical requirements for some scenes meant that Merifield also built interiors at Pinewood Studios. Although the production moved from the UK to Los Angeles for key exteriors at the Standard Hotel, the interiors of the trendy West Hollywood boutique hotel were shot on D Stage at Pinewood.

Although Mortdecai is a comedy, it is packed with action sequences, as Jock constantly saves Charlie from outlandish mishaps. Stunt coordinator and second-unit action director, Rowley Irlam coordinated a motorbike and sidecar careening through Moscow, an unforgettable sword fight and a massive explosion sequence featuring virtually all of the key cast members. One of the most challenging stunt sequences for Irlam and his team was the complicated sword fight between Mortdecai and Emil.

According to composer Geoff Zanelli, David Koepp created “a two-headed monster” when he asked Zanelli to partner with musician, producer and DJ Mark Ronson to create the score for Mortdecai. “David wanted a combination of the sound Mark created on his “Version” album and the storytelling through music he knew he could rely on me for,” says Zanelli. “He said ‘I need melodies and I keep hearing Mark Ronson in this. Would you like to meet with him and see what you two can do together?’ That was an easy thing to say yes to!”