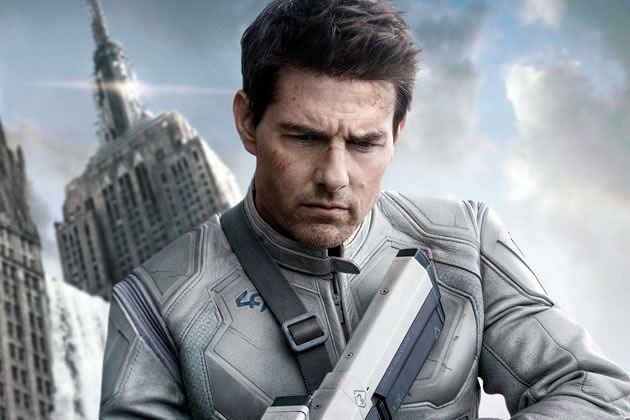 Tom Cruise stars in Oblivion, an original and groundbreaking cinematic event from the visionary director of TRON: Legacy and producers of Rise of the Planet of the Apes.  On a spectacular future Earth that has evolved beyond recognition, one man’s confrontation with the past will lead him on a journey of redemption and discovery as he battles to save mankind. 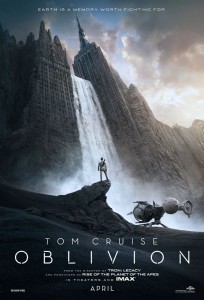 Oblivion marks the first time that superstars Tom Cruise and Morgan Freeman have been paired opposite one another, and the producers knew the film offered the perfect opportunity.

Tom Cruise is joined in this epic action-adventure by Academy Award® winner Morgan Freeman as Beech, leader of a band of survivors who are highly suspicious of Jack’s motives; Olga Kurylenko as Julia Rusakova, a traveler who has crossed time and space in search of true love; Andrea Riseborough as Victoria “Vika” Olsen, Jack’s by-the-book navigator who is ready to depart Earth forever; Nikolaj Coster-Waldau as Sykes, second-in-command of the revolution and the first to want Jack eliminated; and Oscar® winner Melissa Leo as Sally, the commanding officer overseeing the evacuation who has an agenda of her own.

In 2005, five years before Joseph Kosinski directed his first feature, TRON: Legacy, the director wrote a 12-page story titled “Oblivion.” It was a dream of Kosinski’s to turn “Oblivion” into a screenplay, but the timing wasn’t quite right.  The delay would prove fortuitous, however, when Kosinski met Barry Levine and Jesse Berger, co-founders of Radical Studios, several years later.  Together, the men partnered to develop the story into an illustrated graphic novel known in the industry as an “ashcan,” written by Arvid Nelson, illustrated by Andrée Wallin.  This would allow them to demonstrate to investors the direction in which they wanted to go with the property.

When Kosinski considered who would be the perfect Jack, Tom Cruise was certainly at the top of his list.  Still, the director was surprised when he got a call from Cruise’s agent saying that the performer had seen the ashcan from Radical Studios and wanted to sit down and discuss it.

Oblivion began production in March 2012 at the massive Celtic Studios in Baton Rouge, Louisiana.  More than two-thirds of shooting would occur on this Southern back lot, as at any given time the production was operating on five of the seven stages built on this 23-acre studio.  On Stage 4, Kosinski and his crew of approximately 350 began re-creating the New York Public Library.  This set was an uncanny re-creation of the actual library that resides on 42nd Street and Fifth Avenue, only with a postapocalyptic feel, and the build filled the enormous 30,800-square-foot space.

Oblivion shot for 10 days in Iceland, with approximately half of the crew of 300 being Icelandic.  Eight weeks of prep included the shipping of all the production gear and the Bubbleship.  Still, that was cutting it close for such an ambitious shooting schedule out in the elements.