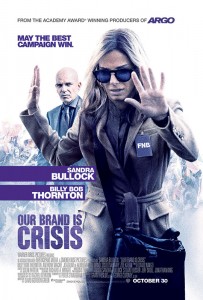 Coincidentally, this film marks the second time that actor Joaquim de Almeida has portrayed a Bolivian president. The first was in “Che,” when he appeared as real-life President Barrientos.

While fictional in both its characters and story, “Our Brand is Crisis” was inspired by true events depicted in the 2005 documentary of the same name from writer/director Rachel Boynton, which chronicles the real-life presidential campaign of Bolivia’s Gonzalo Sanchez de Lozada.

“So much of politics and the election process is absurd, from big business to the media circus, the sound bites and the haircuts,” says director David Gordon Green. Addressing some of the film’s tonal facets.

Producers Grant Heslov who produced “Our Brand is Crisis” in tandem with his Smokehouse Pictures partner George Clooney, goes on to acknowledge, “This isn’t a partisan thing. You can stand on either side and see it; the crazy amount of money involved and the B.S. that goes on.”  Sandra Bullock stars as lead operative Jane Bodine who was also part of the producing team, explains, “When we first meet Jane, she’s had to remove herself from the world in which she’d spent most of her life, for the sake of survival.”

Conversely, “Billy Bob was the perfect choice for Pat because he can say the nastiest things and you still love him,” Green remarks. For Thornton, “Jane and Pat are chess players, but chess players moving real people around the board.”

Jane has an entirely different relationship with Anthony Mackie’s character, Ben, the team leader, whom Green describes as “smart, energetic and good-willed, the likeable anchor in the film.” Though this is the first time Jane and Ben have met, Jane is brought into the campaign by someone who knows her well. Her former associate Nell, played by Ann Dowd.

The practical challenges of shooting entirely in Bolivia led the production to alternative sites, including Puerto Rico, which served as a convincing proxy for exteriors, and New Orleans, where many of the indoor scenes were filmed. They followed this with a week of shooting in Bolivia, where Green says he sought locations infused with “life, rust and texture,” to complete the illusion that they had been there all along.

Months prior to cameras rolling, Green and some of his colleagues, including production designer Richard A. Wright and costume designer Jenny Eagan, took a scouting trip to La Paz, focusing their attention on the city but also exploring rural areas like Lake Titicaca and the rainforests. Green’s partnership with Wright goes back 15 years to the University of North Carolina’s School of Filmmaking, as does his alliance with cinematographer Tim Orr, who has lensed every one of Green’s movies since the two were students.

Wright built nearly a dozen stage sets in New Orleans, including the snowbound cabin where Ben and Nell first approach Jane about joining the Castillo campaign; the Bolivian jail cell where Jane lands after an uncharacteristic night on the town; and the worn interior of Eddie’s home.