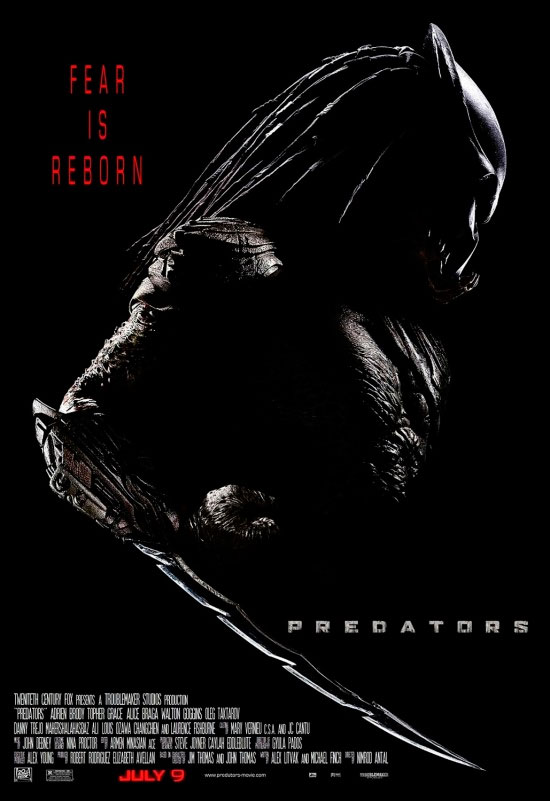 The film was shot on a 53-day schedule. Exterior filming location was mostly set in Kolekole, Hawaii. Filming started on September 28, 2009. The film wrapped up its 22 day shoot on the Hawaii location on November 1, 2009. The film shot its interior set scenes at Robert Rodriguez’s studio in Austin, Texas.

The film follows Royce (Adrien Brody), a mercenary, who wakes up finding himself falling from the sky into a jungle. Once on the ground, he meets other people who have arrived there in the same manner, all of whom have questionable backgrounds, except for a doctor (Topher Grace).

As the film progresses, the group discovers that they are on an alien planet that acts as a game reserve to which they are being hunted by a merciless race of aliens known as Predators.

Producer Robert Rodriguez had developed a script as early as 1994, although it was not until 2009 that 20th Century Fox greenlit the project. According to Rodriguez, the title Predators is an allusion to the second film in the Alien franchise, Aliens (1986). The title also has a double meaning, referring both to the extraterrestrial Predator creatures and to the group of human characters who are pitted against them. Principal photography for Predators began on September 28, 2009 and concluded after 53 days; filming took place in Hawaii and then in Austin, Texas.

Royce (Adrien Brody) awakens from unconsciousness to find himself parachuting into an unfamiliar jungle. He meets several others who have arrived there in the same manner: Mexican drug cartel enforcer Cuchillo (Danny Trejo), Spetsnaz soldier Nikolai (Oleg Taktarov), Israel Defense Forces sniper Isabelle (Alice Braga), Revolutionary United Front officer Mombasa (Mahershalalhashbaz Ali), death row inmate Stans (Walton Goggins), Yakuza enforcer Hanzo (Louis Ozawa Changchien), and doctor Edwin (Topher Grace). All are armed and lethal killers, with the exception of Edwin, though none know where they are or how they got there.

The group follows Royce, who Isabelle suspects is a former black operations soldier turned mercenary. In the jungle they find empty cages, plants with a neurotoxic poison that Edwin collects on a scalpel, and a deceased United States Special Forces soldier. Arriving at higher ground they find themselves staring at an alien sky and conclude that they are not on Earth.