Rain Man is a 1988  comedy-drama film written by Barry Morrow and Ronald Bass and directed by Barry Levinson. It tells the story of an abrasive and selfish yuppie, Charlie Babbitt, who discovers that his estranged father has died and bequeathed all of his multimillion-dollar estate to his other son, Raymond, a man with autism of whose existence Charlie was unaware. 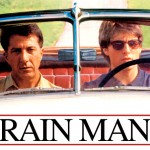 The film stars Tom Cruise as Charlie Babbitt, Dustin Hoffman as Raymond Babbitt, and Valeria Golino as Charlie’s girlfriend, Susanna. Morrow created the character of Raymond after meeting Kim Peek, a real-life savant; his characterization was based on both Peek and Bill Sackter, a good friend of Morrow who was the subject of Bill, an earlier film that Morrow wrote. Rain Man received overwhelmingly positive reviews at the time of its release, praising Hoffman’s role and the wit and sophistication of the screenplay.

Roger Birnbaum was the first studio executive to give the film a green light; he did so immediately after Barry Morrow pitched the story. Birnbaum received “special thanks” in the film’s credits.

Agents at CAA sent the script to Hoffman and Bill Murray, envisioning Murray in the title role and Hoffman in the role eventually portrayed by Cruise. Martin Brest, Steven Spielberg, and Sydney Pollack were directors also involved in the film.

Almost all of the principal photography occurred during the 1988 Writers Guild of America strike; one key scene that was affected by the lack of writers was the film’s final scene. Bass delivered his last rough cut of the script only hours before the strike started and spent no time on the set.