Of Gods and Men is a French drama film directed by Xavier Beauvois, starring Lambert Wilson and Michael Lonsdale. Its original French title is Des hommes et des dieux, which means “Men and gods” and refers to a motto from the Bible shown at the beginning of the film. It centers on the monastery of Tibhirine, where Trappist monks lived in harmony with the largely Muslim population of Algeria, until seven of them were beheaded in a still unclear incident in 1996. The screenplay focuses on the time leading up to their death. Principal photography took place at an abandoned monastery in Morocco, with careful attention to authenticity. 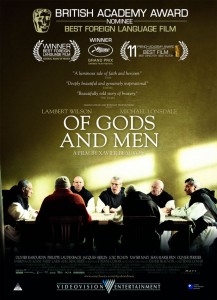 In Of Gods and Men, under threat by fundamentalist terrorists, a group of Trappist monks stationed with an impoverished Algerian community must decide whether to leave or stay.

The film premiered at the 2010 Cannes Film Festival where it won the Grand Prix, the festival’s second most prestigious award. It became a big critical and commercial success in its domestic market. It won the Lumière Award for Best Film and has been nominated for eleven César Awards.

The film opens with a quotation from the Book of Psalms, Psalm 82:6-7: “I have said, Ye are gods; and all of you are children of the most High. But ye shall die like men, and fall like one of the princes.”

In 1996, seven French Trappist monks from the monastery of Tibhirine, Algeria, were kidnapped and found beheaded. The Armed Islamic Group of Algeria claimed full responsibility for the incident. However, according to documents from French secret services, it is possible that the killing was a mistake carried out by the Algerian army during a rescue attempt.

The film project was initiated by Etienne Comar in 2006, when the tenth anniversary of the incident made it a topic again in French media. Comar, a film producer by profession and a Catholic, had been fascinated by the monks since the earliest notions of the abduction, but felt that their death had overshadowed what he thought was really interesting: why they had decided to stay in Algeria despite the ongoing Algerian Civil War. Comar contacted Xavier Beauvois in 2008 after having written a draft, and together they continued to work on the screenplay. The two researched, met with theologians and during a break Beauvois chose to live for six days at the Tamié Abbey in Savoie. Some inspiration was taken from writings by two of the Tibhirine monks, Christian de Chergé and Christophe Lebreton. Franco-American monastic consultant Henry Quinson was asked to correct and add historical and liturgical content for further authenticity. The script was later sent to relatives of the deceased monks, most of whom reacted positively to the project.

The financing coincided with the revelation of the Algerian army’s possible involvement in the incident, which once again sparked an interest for the story from media and the public. Production was led by Why Not Productions with Armada Films and France 3 as co-producers. Financial support was granted by the CNC. The budget was four million euro.

As preparation for their roles, the actors who were to play monks had a month of professional training in the Cistercian and Gregorian chants. Each actor also spent a week living as a monk at the Tamié Abbey. The actors used different approaches to their individual roles. Lambert Wilson primarily used Christian de Chergé’s writings to develop a subjective perception of the monk’s personality. Xavier Maly, a non-Catholic, prepared himself by praying every day for a month. Jean-Marie Frin based his interpretation partially on a home video from Paul Favre-Miville’s vow. Michael Lonsdale on the other hand preferred to rely on instinct, and did not prepare much at all.

Filming started in early December 2009 in Meknes, Morocco, and ended two months later. The main filming location was the Benedictine monastery of Tioumliline, which had stood unused and unattended for more than 40 years. The film team, under production designer Michel Barthélémy, renovated the monastery so it would resemble the location of the actual events. Quinson who had assisted with the screenplay was also present on the set as an advisor. Attention was paid to extras’ clothing and Arabic intonation so that they would look and sound Algerian and not Moroccan.

The Cannes Film Festival jury, led by American director Tim Burton, honoured the film with the Grand Prix. The Grand Prix is the festival’s second most prestigious award, after the Palme d’Or which was won by Uncle Boonmee Who Can Recall His Past Lives in 2010. Of Gods and Men also received the Prize of the Ecumenical Jury. In France, it was nominated for eleven awards at the 36th César Awards, which was more than any other film that year. The nominations were for Best Film, Wilson as Best Actor, both Lonsdale and Olivier Rabourdin as Best Supporting Actor, Best Director, Best Original Screenplay, Best Sound, Best Cinematography, Best Editing, Best Costume Design and Best Production Design. It won the 16th Lumière Award for Best Film and Lonsdale received the Best Actor prize. It was also nominated for Best Director and Wilson as Best Actor in a nomination shared with his performance in The Princess of Montpensier.