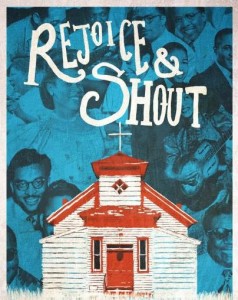 “No wonder the music is so beautiful. God is on their side.” Rejoice and Shout is a documentary on Gospel music’s 200-year history.

Rejoice and Shout uses vintage photos, probing interviews, and clips from hundreds of hours of rare film and audio recordings, Rejoice and Shout honors and celebrates the musical history of African-American Christianity. In his most ambitious project to date, director Don McGlynn takes on the entire 200-year evolution of gospel music in black America.

Going back to its earliest roots in the 19th century, when plantation owners forced slaves to convert to Christianity, McGlynn connects the dots that led to today’s soul and R&B music—as Claude Jeter’s falsetto voice begat Al Green, so the Dixie Hummingbirds led to groups such as Temptations.

Years in the making, Rejoice and Shou captures so much of what is special about this music and African-American Christianity – the sermonizing, the heartfelt testimonials, getting “slain in the spirit,” the hard hollerin’, and of course the inspiring music. The film shows how gospel was, and still remains, so much more than mere pop music to the African-American community; how it helped sustain the spirits during the darkest hours of repression during slavery, the Jim Crow era, and the civil rights movement.

Filled with hard-to-find performances and recordings by Mahalia Jackson, Smokey Robinson, Sister Rosetta Tharpe, the Wards, James Cleveland, the Staple Singers, the Blind Boys of Alabama, and many others, Rejoice and Shout is a must-see not just for gospel aficionados but for anyone who appreciates the inspirational power of music.

Perhaps the most intense and emotional music you can ever hear is the best of African-American Gospel music. Foot-stomping and hand-clapping likely will start from the opening credits.