RISEN is the epic Biblical story of the Resurrection, as told through the eyes of a non-believer. Clavius (Joseph Fiennes), a powerful Roman military tribune, and his aide, Lucius (Tom Felton), are tasked with solving the mystery of what happened to Jesus (referred to by the Hebrew name Yeshua in the film) in the weeks following the crucifixion, in order to disprove the rumors of a risen Messiah and prevent an uprising in Jerusalem. 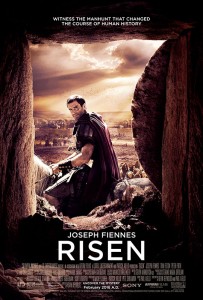 To make sure their scenes together crackled with tension, Cliff Curtis and Joseph Fiennes avoided eye contact during the four-month-long shoot except when cameras rolled.

The biblical account of Yeshua’s crucifixion and resurrection has been portrayed on the big screen many times, so when LD Entertainment approached Kevin Reynolds to make a movie about the world-changing events of 2,000 years ago, the writer-director was determined to bring a fresh approach to the story. In contrast to previous versions, Reynolds imagined the narrative told though the skeptical eyes of a non-believer. “We wanted to do something completely different from what had come before, soI came up with the idea that Risen would betold as a detective story,” he says.

The concept clicked with producer and LD founder Mickey Liddell, who cycled through numerous scripts and directors after launching the project eight years ago. “I loved Kevin’s idea that our audience would be able to experience something ancient and sacred as if it were brand new.”

At the center of the film is Joseph Fiennes as Clavius. The versatile British actor immediately appreciated Reynolds’ approach to New Testament storytelling. “When I read the script, I marveled at the fact that I’d just digested a biblical story that came across as an extraordinary murder mystery,” says Fiennes. Director Reynolds saw Fiennes as the perfect choice to portray Clavius. “Joseph has a physical presence but he also has a vulnerability that the character requires,” says Reynolds.

The central mystery in Risen of course revolves around the miraculous comings and goings of Yeshua. He is portrayed by veteran actor Cliff Curtis,who had worked previously with Reynolds in the 1994 Easter Island picture Rapa Nui. “When producer Patrick Aiello suggested Cliff, I immediately sparked to the idea because I know how intense and versatile he can be,” says the director. Curtis’ approach hewed perfectly with the character as written on the page. “One of the challenges with Yeshua is that he doesn’t have a lot of scripted dialogue,” observes Reynolds. “That’s why we needed someone who could manifest the presence of Yeshua without being able to do it verbally.” Curtis, who descends from the Maori, the indigenous people of New Zealand,considered the role the challenge of a lifetime. “Whether you believe he was the son of God or not, Yeshua was an extraordinary human being,” he says.

The role of Clavius’ aide-de-camp,Lucius,was a significant departure for actor Tom Felton, known to moviegoers worldwide as Harry Potter’s platinum-blond classroom nemesis Draco Malfoy. Reynolds auditioned numerous young actors for the role of Lucius but sensed early on that Felton would be the right man for the job. “Tom was a wonderful surprise for me,” he says. “We read a lot of people for the character and at the time he didn’t even have a name—we just called him ‘The Aide.’ When Tom came on board, he made the character much more than he was on the page. He’s got that ephemeral ‘it’ thing that real stars have, which really makes Lucius stand out.”

Joining the Apostles as part of Yeshua’s inner circle is the former prostitute Mary Magdalene, as portrayed by María Botto. The Spanish actress fondly remembers bonding with her cast mates during a series of informal Sunday gatherings organized by actor Cliff Curtis. “Some of us read poetry, others sang,” she says.

Risen was filmed in Spain and Malta, an island nation gifted with eerily beautiful landscapes and ancient catacombs, which previously served as a key shooting location for Reynolds’2002 swash buckler The Count of Monte Cristo.While Malta’s gorgeous scenery offered as spectacular backdrop, the heat proved to be a formidable obstacle, especially in August, when the filmmakers shot the crucifixion scene over the course of four extremely humid, 90-degree days.

The climactic Sea of Galilee sequences were filmed primarily in the Almería province along the coast of Spain, which featured miles of pristine white-sand beaches and crystal-clear turquoise water.