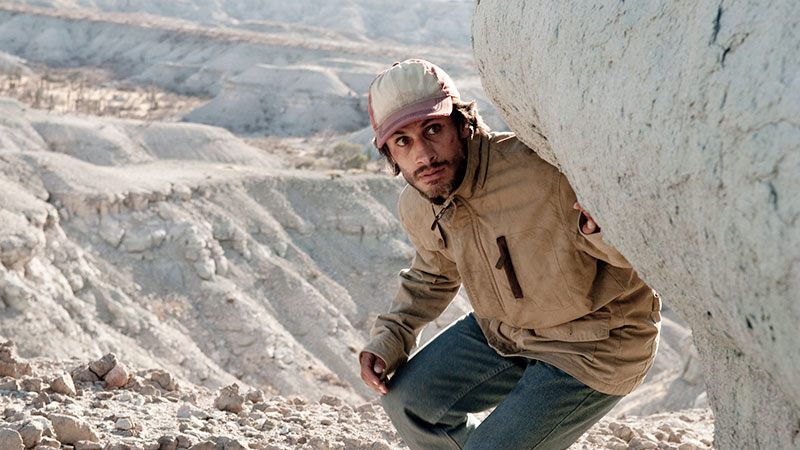 What begins as a hopeful journey to seek a better life becomes a harrowing and primal fight for survival when a deranged, rifle-toting vigilante targets a group of unarmed men and women through the treacherous U.S.-Mexican border.  In the harsh, unforgiving desert terrain, the odds are stacked firmly against them as they horrifyingly discover there’s nowhere to hide from the unrelenting, merciless killer. 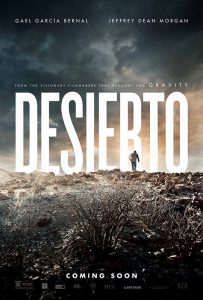 Desierto marks a particularly personal journey in storytelling for writer, director, editor and producer Jonás Cuarón who spent the last seven years bringing the story of the migrant experience to the screen. In his own words: “I took a trip through the U.S. Southwest where I encountered first-hand stories surrounding immigration and the often cruel and violent story of the migrant journey. I was very moved and immediately felt compelled to outline the film – which happened even before writing Gravity.”

Collaborating with his Academy AwardÒ winning father Alfonso Cuarón and his Uncle Carlos Cuarón, Jonás explains, “Whenever I finish the first draft of a screenplay, I show it to my dad and my uncle Carlos to get their feedback. My dad is my closest collaborator and mentor and by the time I started raising Desierto I’d spent the last four years working with him on Gravity, so it was just natural to have both of them as producers on the project.”

Carlos introduced Jonás to Alex Garcia since he had previously worked with the producer on Besos de Azúcar and Alex believed in the project from the moment Jonás pitched it to him.

“Bringing Gael (García Bernal) on board was a no-brainer, not just for his skillful acting but also for the soul I trusted he would bring to the story,” says Cuarón.  He adds, “I knew that Gael also felt very passionately about issues surrounding immigration and would bring to life the struggle, hope and determination that are the fabric of the migrant story.  In casting Sam, it was important for me not to fall into ‘the villain’ cliché and I wanted to create a three dimensional character. I was already excited to work with Jeffrey (Dean Morgan) as I knew he could give the character the emotional complexity I was looking for. U.S. actors are not used to playing these types of roles, normally it is foreigners shooting them, and not the other way around, so I was nervous Jeffrey was not going to like the script – but Jeffrey was really excited about the character and themes of the story.”

On finding the perfect location Cuarón says, “Since I wrote the script, I knew that other than my two main characters, the desert was going to be the film’s most important element. So I spent over two years scouting this film. I visited deserts all across the globe during this process- Anza Borrego; Joshua Tree and Death Valley in California; southern Utah; Arizona; New Mexico; Almería in Spain; Morocco; and all of Mexico. This scouting process was great, not only because at the end I found the location where I ended up shooting, but because in the process I learned a lot about the landscape of the desert and was able to incorporate my knowledge into the script.  Production ended up filming in the state of Baja California Sur, two hours away from civilization, in locations that you could only reach via dirt roads and without cellphone coverage. The temperatures were in the three digits, and there was no shade to protect them from the sun.” In other words, Cuarón admits, “It was a logistical nightmare.”