Roadie is a drama movie about Jimmy who is broke and desperate after being canned from a 20-year job as roadie for Blue Oyster Cult. With nowhere else to go, he returns home to Forest Hills, Queens to visit his aging mother, where a wild night with some hard-partying high school friends shows him that some things never change. 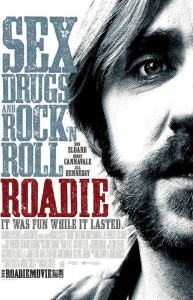 After 20 years on the road with Blue Oyster Cult, Jimmy Testagros returns to his hometown to life with his ailing mother.

Gerald Cuesta, the writer, observes that Roadie can be “about how a guy can get stuck in mid-life, relying on the things that excited and moved him as a teenager that once pulled him through, and how they just don’t work the same magic anymore. It’s the idea of holding onto something long after its expiration date.”

Like the low-key production of L.I.E., Cuesta and his producers found great joy in the kismet of working in natural locations as they shot Roadie. The magic happened on Roadie when the house Cuesta chose to play the Testagross home came complete with that old red Camaro rusting in the driveway, a feature not previously scripted and yet so integral to the finished film. The house also came pre-decorated: the owner had died just a month prior, and her family was planning to liquidate the house and property remotely.

Eldard and Hennessy had never worked together before Roadie, though you wouldn’t know it from their long, moving scenes together as their characters reminisce in the Roadie’s childhood bedroom / classic rock shrine.

If Roadie is a movie about how ghosts of the past can shape the way we experience the present, then we should probably talk about how the ghosts of Cuesta’s past shaped Roadie.