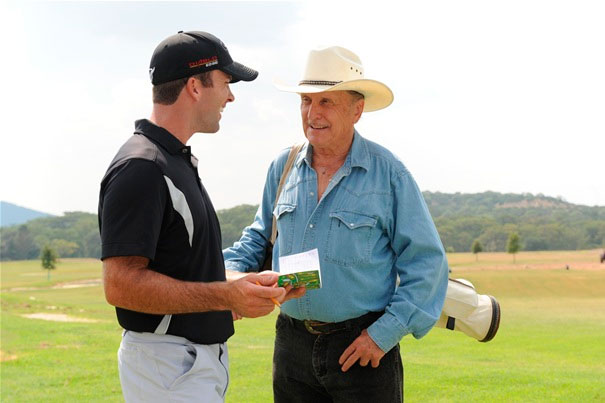 From the best-selling novel that inspired people around the globe and starring Academy Award® winner Robert Duvall reunited for a third time with Lucas Black (following their acclaimed pairing in SLING BLADE and GET LOW), comes Seven Days in Utopia, the heart-stirring tale of how an unlikely but powerful friendship sparks a young man’s life-altering week of transformation. 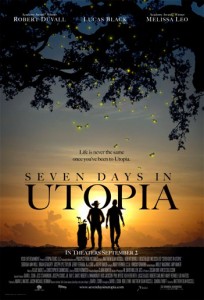 While Seven Days in Utopia is about a lot more than golf, the filmmakers were determined to give golf the cinematic treatment it has never received in Hollywood – one with the visceral kick of whip-cracking swings and sweaty-palmed putts that would let fans richly enjoy the tournament scenes as if they were right there on the fairway. With more than 20 million golf players in the U.S. alone – all after that rare joy and exaltation of chasing that perfect drive — Matt Russell and the whole team knew there was an unsatisfied hunger for a golf movie that would finally get the details right.

Drawn to the film’s themes of community, family and mentorship, a stellar supporting cast joins Duvall and Black, including Deborah Ann Woll, Brian Geraghty and Academy Award® winner Melissa Leo. The film is also the first to receive the full participation of the professional golf world, with a key role taken by golf legend K.J. Choi, and support from PGA of America and the Calloway PGA Tour. It not only features a moving human drama but some of the most authentic golf action yet seen on the screen.

Seven Days in Utopia is directed by Matt Russell from a screenplay by Russell, David L. Cook and Rob Levine based on the book and story by David L. Cook. The producers are Mark G. Mathis and Jason Michael Berman.

The heart and soul of Seven Days in Utopia is the character of Johnny, who despite the look of things is no ordinary Texas rancher. As soon as he finds young athlete Luke Chisholm in a heap on his property, he begins to take him on a galvanizing journey that will change both Luke’s game and his whole definition of what it means to be winner. The filmmakers always knew they would need an actor of considerable subtlety and humanity to bring Johnny to life but they were blown away when Academy Award® winning legend Robert Duvall, one of America’s most diverse and adored actors, expressed interest. No one could imagine a better Johnny.

Known for his portraits of complicated men trying to turn their lives around, here Duvall had a chance to play the very opposite: a man who has been through his own ups and downs and is now itching to share the bedrock of understanding and faith that have resulted. His performance as Johnny is very much in the cinematic tradition of enchanted strangers who uplift a lost man’s life – except that Johnny’s power is rooted in a gritty, hard-won wisdom rather than magical realism.