Shrek Forever After, taglined as Shrek: The Final Chapter, is a 2010 animated comedy fantasy-family film, and it is the fourth and final installment in the Shrek film series. The film is produced by Dreamworks Animation and is distributed by Paramount Pictures. It was released in cinemas on May 20, 2010 in Russia, on May 21 in the United States, Pakistan, Canada, India and on May 28 in Vietnam. 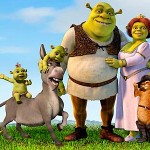 Tim Sullivan wrote the original story Shrek Goes Fourth, but Darren Lemke and Josh Klausner made the rewrites, and Mike Mitchell directed the new installment, replacing Chris Miller, who directed the previous film, while Shrek and Shrek 2 are both directed by Andrew Adamson. Also, all the principal cast members reprised their roles. On November 25, 2009, DreamWorks Animation announced that the Shrek series would end with Shrek Forever After being The Final Chapter.

The film was then released on June 17, 2010 in Australia and Sri Lanka and on July 2, 2010 in the United Kingdom and Ireland. It was released in 3-D and IMAX 3D theaters. Although the film received mixed to positive reviews from critics and opened lower than expectations, it remained as the #1 film in the United States and Canada for three consecutive weeks and has grossed a worldwide total of over $693 million, making it a commercial success.

Like the first three Shrek films, the film is based on fairy tale themes.

The film begins just before Shrek rescues Princess Fiona in the first film. Desperate to lift their daughter’s curse, King Harold and Queen Lillian meet with con artist Rumpelstiltskin, who requests becoming king of Far Far Away in curry exchange. Just before the deal is contracted, the king and queen learn that Fiona has already been rescued. In the present, a disgruntled Rumpelstiltskin wishes Shrek was never born and seeks revenge.

Meanwhile, Shrek has grown tired of being a domesticated family man and celebrity among the local villagers, leading him to yearn for the days when he felt like a “real ogre.” It is his children’s birthday party where lots of fictional characters appear. Shrek gets easily annoyed here as the 3 little pigs eat the children’s cake up and a little kid called Butterpants keeps wanting him to do his infamous roar.

After lashing out at his family and friends during the party, Shrek storms off and meets with Rumpelstiltskin, who offers to give Shrek a day to live like a real ogre again in exchange for a day from his childhood he wouldn’t remember being erased. Shrek agrees and signs the contract, and abruptly lands in a world where he is still feared by villagers.

He enjoys causing mischief until he finds wanted posters for the ogress Fiona and his home deserted. He is suddenly captured by witches and taken to Rumpelstiltskin, who is now the king of Far Far Away and uses ogres for slave labor.