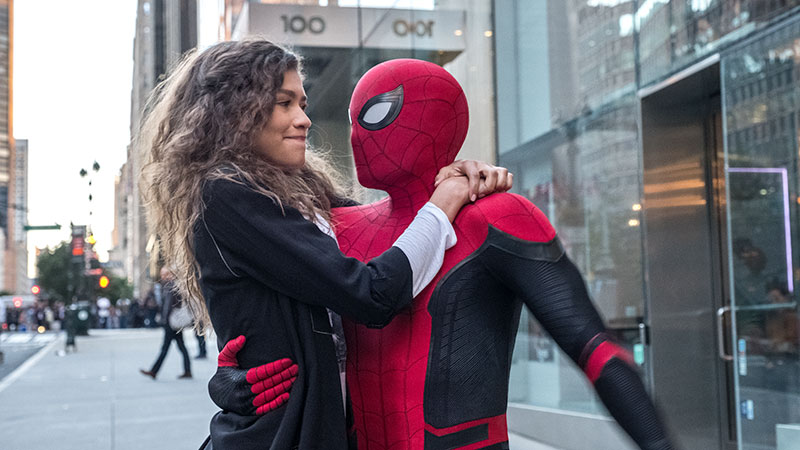 In Spider-Man™: Far From Home, Tom Holland returns as our friendly neighborhood Super Hero who, following the events of Avengers: Endgame, must step up to take on new threats in a world that has changed forever. The film expands the Spider-Man film universe, taking Peter Parker out of his comfort zone and his home in Queens, New York City, and hurling him across Europe during what was supposed to be a school vacation – but which becomes his greatest challenge and most epic adventure ever. 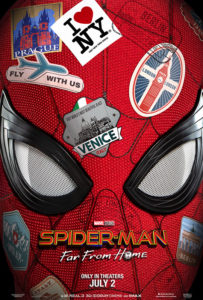 In addition to the classic suit, Spider-Man wears the Iron Spider costume, a gift from Tony Stark, as seen in Avengers: Infinity War and Avengers: Endgame. In addition, Nick Fury gives Peter an all-black “stealth” suit, designed to let Spider-Man operate under the radar during his European adventures. The stealth suit was influenced by the costumes worn by several other MCU characters, including Black Widow, Captain America, and Hawkeye.

Spider-Man: Far from Home brings together humor, heart, scale, and everything you love about Spider-Man and the MARVEL Cinematic Universe (MCU). Says director Jon Watts, who previously helmed the blockbuster Spider-Man: Homecoming and, before that, the acclaimed independent drama Cop Car: “We were always looking for a way to deal with some very emotional themes while remaining true to the tone we set in Spider-Man: Homecoming.”

“This next Spider-Man adventure takes place soon after and fits right in to the events of Avengers: Endgame,” says producer Kevin Feige.  “Peter and the world are dealing with the loss of Iron Man, and Peter just wants to take a break to be a regular teenager.  But Spider-Man can’t be a regular teenager – he has responsibilities toward the world, especially now.  So when Nick Fury tracks him down on his summer vacation to deal with a new threat, that’s what Peter will have to face – is he ready to step up?”

Just as this film opens up a new universe of responsibilities and adventure for Peter Parker, Tom Holland’s journey with the character has been equally life-changing for him. “It’s been an incredible experience that’s expanded my life in the real world and in the MARVEL Cinematic Universe,” he notes. “It’s been, literally, a dream come true.”

Academy Award®-nominated actor Jake Gyllenhaal portrays Mysterio, who his character explains is from an Earth that exists in a dimension parallel to ours. “It was incredibly important to us to bring an actor of Jake’s intelligence, who carries wit and depth, to the role,” says Pascal. “As much as we talked about Mysterio in a practical way – like how his powers would work in the movie – when Jake got involved, he brought a new level of humanity, unpredictability, and humor to the character.  There’s always a desire to bring actors we all love from other films into this world, and Jake’s a great example of the kind of character an actor of his caliber can bring to life.”

Another key adult figure in Peter’s life is Happy Hogan, Tony’s Stark’s head of security and best friend. Happy is once again portrayed by actor-filmmaker Jon Favreau, who has been an instrumental force in the MCU since setting its template by directing the franchise’s first film, Iron Man.

Academy Award® winner Marisa Tomei returns as May Parker, a role she first took on in Spider-Man: Homecoming. It was a no-brainer for her to reprise the character. “I am so impressed with this film’s global feel and, at the same time, its hometown heart,” she explains. Unlike previous iterations of the character, Tomei’s May is fully aware of Peter’s secret identity. Moreover, says Pascal, “She’s a social warrior who puts her nephew’s powers to work for the greater good.”

Zendaya returns as MJ, Peter’s whip-smart classmate, friend and, now, possible love interest. In addition, she figures out a major piece of the Peter Parker puzzle – that he’s Spider-Man – further complicating a new romance that’s not going as smoothly as Peter would like.

Love is also in the air for Peter’s best friend Ned, once again played by Jacob Batalon. Ned is falling for classmate Betty Brant, played by Angourie Rice. “That romance has also triggered an evolution in the friendship between Ned and Peter,” says Batalon. “In Spider-Man: Homecoming, Ned was Peter’s sidekick. This time, he’s found love and sees what that’s all about. He’s really happy to make an instant connection with Betty.”

Also returning is Tony Revolori, as Flash Thompson, who’s a self-styled Vlogger, as well as a huge fan of Spider-Man – while being a complete jerk to Peter. “I loved exploring that dichotomy of him loving Spider-Man and always ridiculing Peter,” says Revolori.

Spider-Man is closely tied to his home in Queens, New York, but Spider-Man: Far From Home expands the webbed hero’s world, taking him to exotic settings all over Europe, including Venice, Berlin, Prague and London. “The goal was always to shoot as much as possible on location,” says Watts. “That helped give this film a scale beyond anything possible we would have created on a stage.”

Production then moved to the Czech Republic, for sequences set in Prague. The team captured some romantic moments between Peter and MJ on the city’s iconic Charles Bridge, as well as a sequence at The State Opera Building, where Spider-Man tries to maneuver undetected through a gala event. In Liberec, they filmed a spectacular action scene involving a carousel and Ferris wheel that are demolished.

Holland and the rest of the cast were especially impressed with sets built for a massive action sequence set in Venice, including half of the storied Rialto Bridge and a fish market, as well as a series of massive water manipulations that simulated tidal waves crashing into Peter as he battles the Elementals.