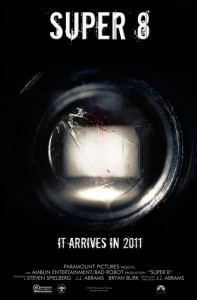 Super 8 is a secret movie produced by J.J. Abrams

Abrams has refused to reveal the plot of the film as he wants to keep it a mystery and let the images speak for themselves. What has been confirmed is that it will take place in 1979 and it will be a homage/tribute to Spielberg’s ’70s and ’80s science fiction films with a mystery and supernatural feel from Abrams. Some believe the plot will revolve around three kids who are making a fun movie with a “Super 8” camera and catch an extra-terrestrial on film.

Abrams and Spielberg collaborated in a storytelling committee to come up with the story for the film.  It was initially reported to be either a sequel, or a prequel to the 2008 film Cloverfield.  However, Abrams quickly responded to those reports by stating, “You have to check the trailer, but it has nothing to do with Cloverfield”.  It will be shot traditionally, and filming will start in fall 2010. The teaser itself was filmed separately in April.  This film is the first original J. J. Abrams film project. Amblin Entertainment, Bad Robot Productions and Paramount Pictures will produce. Filming took place in Weirton, WV from September-October 2010.

The theatrical teaser trailer for director J.J. Abrams’ (Cloverfield, Lost) top-secret new creature movie debuted in theaters with ‘Iron Man 2′ on May 7, 2010 (conventional theaters and IMAX). The sci-fi thriller takes place in 1979 after The U.S. Air Force closed a section of AREA 51 and involves the arrival of an undocumented species that has escaped from a secure facility in Ohio — captured on film by amateur cinematographers.