In the wake of losing a coveted TV network deal, the actors who play the Trailer Park Boys find themselves out of a job and stage an all-in comeback by launching “Swearnet”, a balls-out, offensively extreme internet channel that is complicated by their post-fame lives, at-odds relationships and trademark hilarious hedonism. 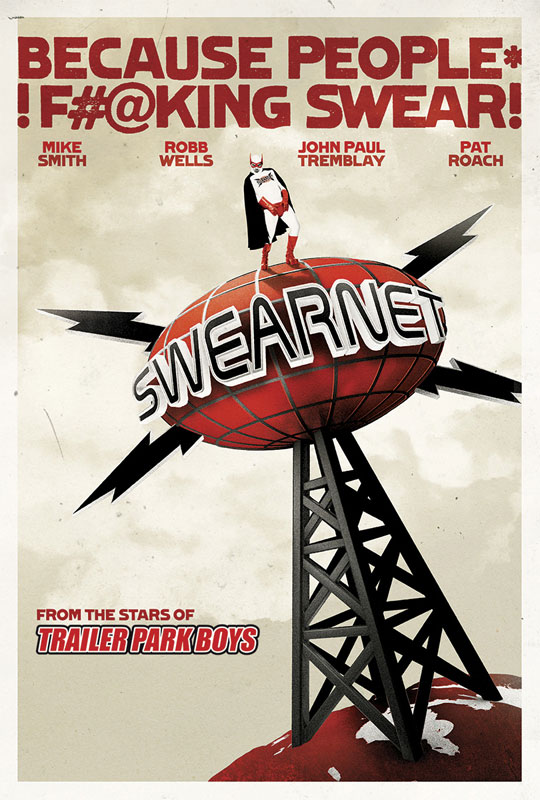 All of the guys and the filmmakers understand Swearnet may be not beloved by all. Vulgarity, after all, is in the eyes of the beholder.

Swearnet is a sort of exaggerated, sort of hyper-reality, sort of true story of the guys coming up with the idea of their own Internet television channel. “We are starting our own regular network,” says actor Mike Smith. “We anticipate there will be a morning show, a cooking show, who knows, even a fishing show. It doesn’t matter. Any type of show you see on any other network, but ours will have swearing.”

To further emphasize this is all real, there are no “characters” in the movie per se, as Mike Smith is Mike Smith, JP Tremblay is playing JP Tremblay and Robb Wells is Robb Wells. And they’ve added all the many things they love, censors be damned: profanity, drugs, nudity, sex, beautiful women, car racing, drinking, rock and roll, fighting and general mayhem.

“This is a meta-comedy,” says Warren P. Sonoda, who is the director of Swearnet. “The stars of this movie play themselves. It’s hard sometimes to tell when they are ‘acting’ and when they are ‘themselves’ because it sometimes merges, but they are always very, very aware of what the funny is, what the joke is or where the humour lies and they sometimes forget that they are playing characters who happen to be themselves but they have a good time doing it man.”

When Smith, Tremblay and Wells decided to write a script about “no limitations, no restrictions and no censorship,” they did so as a trio in their offices in Halifax, Nova Scotia, never initially thinking the movie would be somewhat autobiographical with actual business prospects as a result. But as the screenplay began to take shape, it made sense that a real swearnet.com should also come about. The movie reflects the full creative and financial process, from establishing the idea, to finding financing, to seeking like-minded individuals who would and could also want to be a part of the project.

One such gentleman is Pat Roach, a former co-star of the Trailer Park Boys who played the seemingly always shirtless assistant trailer park supervisor, Randy. In this film, he too plays himself – Pat Roach – as well as Swearman, the Mascot of the new network.

Roach has an interesting take on the rampant cursing in the film. “I think swearing is much better than violence or someone getting killed,” he says. “It’s funny that someone could embrace going to a movie with a sniper and shooting and being okay with that, but not be okay with swearing. I don’t get it. People get mad at swearing but the guns and all that seem to be fine? That’s weird.”

Also playing themselves in the film are Tom Green, Sebastian Bach and Carrot Top, each of whom are Trailer Park Boys fans.