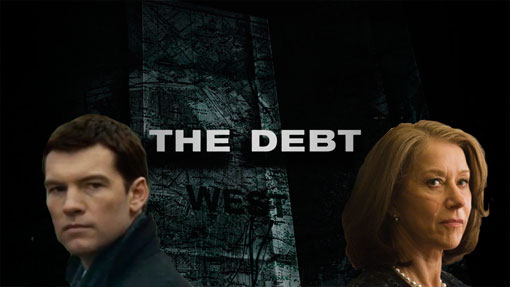 Filmed on location in Tel Aviv, the U.K., and Budapest, the espionage thriller The Debt is directed by Academy Award nominee John Madden (Shakespeare in Love). The screenplay, by Matthew Vaughn &amp; Jane Goldman and Peter Straughan, is adapted from the 2007 Israeli film Ha-Hov [The Debt]. At the 2011 Beaune International Thriller Film Festival, The Debt was honored with the Special Police [Jury] Prize. The movie  stars Helen Mirren, Ciarán Hinds, Sam Worthington and Tom Wilkinson. 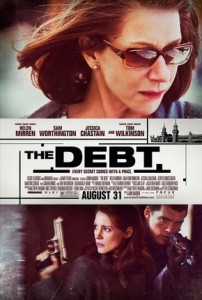 The Debt premiered at the 2010 Toronto International Film Festival in September 2010.

Producer Eduardo Rossoff took note of the film as being ideal for an English-language remake, tied to its unique two-tiered storyline revolving around 30-year-old secrets coming to light, and brought Ha-Hov to the attention of producer Kris Thykier.

The story begins in 1997, as shocking news reaches retired Mossad secret agents Rachel (played by Academy Award winner Helen Mirren) and Stephan (two-time Academy Award nominee Tom Wilkinson) about their former colleague David (Ciarán Hinds of the upcoming Tinker, Tailor, Soldier, Spy). All three have been venerated for decades by Israel because of the secret mission that they embarked on for their country back in 1965-1966, when the trio (portrayed, respectively, by Jessica Chastain [The Tree of Life, The Help], Marton Csokas [The Lord of the Rings, Dream House], and Sam Worthington [Avatar, Clash of the Titans] tracked down Nazi war criminal Dieter Vogel (Jesper Christensen of Casino Royale and Quantum of Solace), the feared Surgeon of Birkenau, in East Berlin.

Israeli papers reported that Helen Mirren was “immersing herself” in studies of the Hebrew language, Jewish history, and Holocaust writings, including the life of Simon Wiesenthal, while spending time in Israel in 2009 to film scenes in the movie.

Sam Worthington was intrigued by the character’s moral conviction and emotional burdens. “David is a man who lost his entire family in the Holocaust, and is consistently questioning his own worth,” the actor states.