When a legendary stage actor suddenly and inexplicably loses his ability to perform, he plunges into a profound depression. In an effort to regain his gift, he embarks on an affair with an iconoclastic woman half his age, who is both gay and the daughter of old friends, which wreaks havoc in both their lives. 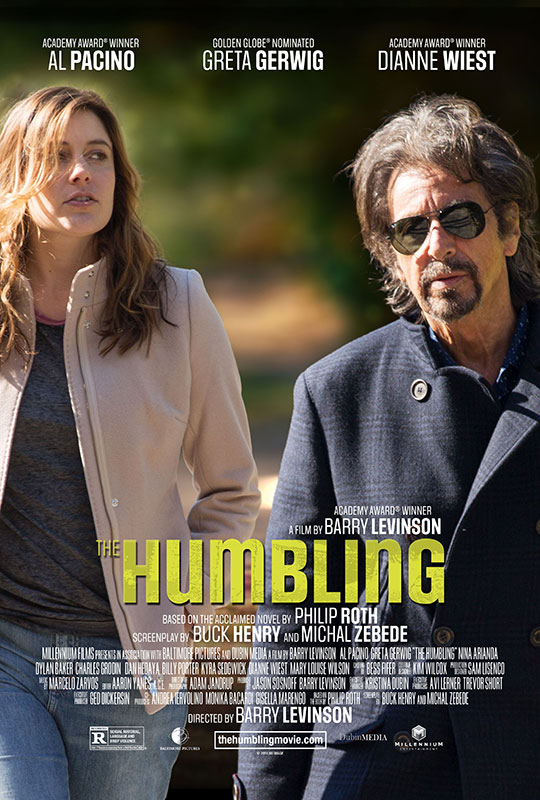 Fans of the novel may notice subtle differences in the narrative, which Levinson says were necessary to translate Roth’s story for the screen.

THE HUMBLING from the screenplay by Buck Henry and Michal Zebede based on the novel by Philip Roth. Academy Award®-winning actor and seven-time nominee Al Pacino and Academy Award-winning director and six-time nominee Barry Levinson have collaborated on a film version of THE HUMBLING that captures both the pathos and the absurdity of pursuing the creative life. For Pacino, who plays aging actor Simon Axler, THE HUMBLING was an intriguing challenge that struck close to home.

“It’s very rare that I read a book and I want to make a movie of it. It’s just one of those experiences that doesn’t happen often. THE HUMBLING fascinated me and seemed close to my life in some ways. Simon’s dilemma is something that I think I’m living through now or maybe headed for.” says the celebrated actor.

Pacino optioned the property soon after reading it and brought it to the attention of Levinson, with whom he had previously worked on You Don’t Know Jack. Throughout the development process, the pair met often in New York City restaurants and cafes to discuss the best way to bring Roth’s black comedy to the screen. Producer Jason Sosnoff joined the team after hearing Levinson’s description of the novel’s premise.

One of the most important decisions the filmmakers faced was who was going to play the part of Pegeen, Simon’s offbeat love interest. The filmmakers interviewed an array of actresses before arriving at Greta Gerwig. Gerwig and Pacino share an unusual onscreen chemistry, according to Levinson.

With Barry Levinson directing and Al Pacino starring in a film based on a Philip Roth book and sporting an eclectic cast full of acclaimed actors, it may be difficult to think of THE HUMBLING as an indie film. But in fact it was produced on a modest budget with a shooting schedule of just 20 days. Levinson even agreed to shoot some scenes in his own house to streamline the process. “After making 30 movies, he should know better than to let a freakin’ film crew shoot in his house,” laughs Sosnoff. “But he did!”

Levinson found the pace exhilarating and even freeing. “It was great working with a small stripped-down indie crew,” he says. “We were able to move extremely fast, so with just 20 days to shoot, we never felt rushed. We spent as much time as we needed. It was set up in a way that I think everyone felt comfortable enough to explore and experiment.”