The Fighter is a 2010 biographical sports film directed by David O. Russell, and starring Mark Wahlberg and Christian Bale. The film centers on the life of professional boxer “Irish” Micky Ward (Wahlberg) and his older half-brother Dicky Eklund (Bale). Amy Adams co-stars as a love interest of Ward. The Fighter is Russell and Wahlberg’s third film collaboration, following Three Kings and I Heart Huckabees. 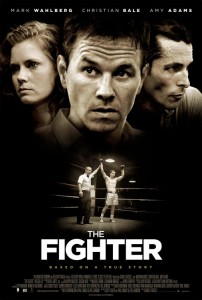 The Fighter was filmed on location in Ward’s hometown of Lowell, Massachusetts. Its boxing matches were shot at the Tsongas Center at UMass Lowell, and gym scenes at Arthur Ramalho’s West End Gym, one of the real-life facilities where Ward had trained.

As a welterweight from the wrong side of the tracks, Irish-American Dicky Eklund is the pride of working class Lowell, Massachusetts. Living in his shadow is his half-brother and sparring partner Micky Ward. After fighting Sugar Ray Leonard, Eklund plunges into a nightmare of crack addiction, violence and prison. His family’s hopes are crushed in the wake of Dicky’s decline. Like a real life Rocky, Micky fights on his own terms and pulls his family out of despair with his meteoric rise in the ring. Freshly paroled Dicky finds redemption training his little brother, now known as “Irish” Micky Ward, for his Welterweight Championship bout with Shea Neary.

Scout Productions acquired the life rights of boxer Micky Ward and his brother, Dick Eklund in July 2003. Eric Johnson and Paul Tamasy were also hired to write the screenplay, which was rewritten by Lewis Collick. Mark Wahlberg joined the production in early 2005, with the intention of doing Ward’s life story justice. Paramount Pictures, the United States distributor of the film, hired Paul Attanasio to rewrite Collick’s draft in February 2007 in an attempt to emphasize the themes of brotherhood and redemption. Hoping to start production in Massachusetts in June 2007, Mark Wahlberg had Martin Scorsese read the screenplay, hoping he would direct. Scorsese turned down the offer, finding the Massachusetts-setting redundant after having finished The Departed. The actor cited Scorsese’s Raging Bull as an influence for The Fighter, but Scorsese was not interested in directing another boxing film. Darren Aronofsky was hired to direct in March 2007, with Scott Silver rewriting the script in September 2007.

Production proceeded with filming set to begin October 2008 and Christian Bale replacing Brad Pitt. By then Aronofsky had dropped out to work on MGM’s aborted RoboCop remake, followed by Black Swan. Wahlberg and Bale chose David O. Russell as Aronofsky’s replacement. Wahlberg had also starred in Russell’s Three Kings and I Heart Huckabees. Aronofsky was given an executive producer credit for his contributions on The Fighter, and was enthusiastic to have David O. Russell as the director. In April 2009, Relativity Media stepped up to entirely finance the film, selling the international distribution rights to The Weinstein Company a month later. The Fighter began principal photography on July 13, 2009, on an $11 million budget in a 33-day shooting schedule.