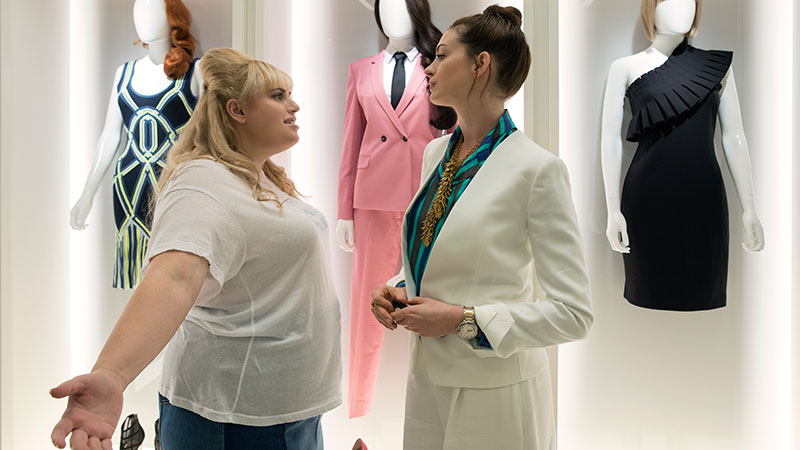 Rebel Wilson and Anne Hathaway have winning chemistry as a pair of con artists plying their trade in a stunning seaside town in the south of France. Josephine Chesterfield (Hathaway) is a glamorous, seductive Brit with a sprawling home in Beaumont-sur-Mer and a penchant for defrauding gullible wealthy men from all corners of the world. Into her well-ordered, meticulously moneyed world bursts Penny Rust (Wilson), an Aussie who is as free-form and fun-loving as Josephine is calculated and cunning. Where Penny amasses wads of cash by ripping off her marks in neighborhood bars, Josephine fills her safe with massive diamonds after ensnaring her prey in glitzy casinos. Despite their different methods, both are masters of the art of the fleece so they con the men that have wronged women. 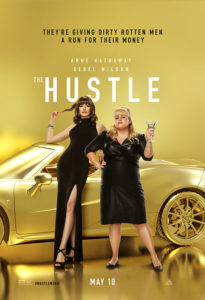 It’s a confusing world in which Sharp, who is British, is playing an American and Hathaway, who is American, is playing British, except when she’s playing a German doctor. “The only person actually talking in her own accent is Rebel,” says movie director Chris Addison.

In The Hustle, femme con artists bring their own distinctive skills to the art of the con. “My character is a ruthless con woman, but she also has a heart,” says Wilson, who is also a producer of The Hustle. Inspired by Bedtime Story (1964), written by Stanley Shapiro & Paul Henning, and Dirty Rotten Scoundrels (1988), written by Stanley Shapiro & Paul Henning and Dale Launer, screenwriter Jac Schaeffer joins the mix with director Chris Addison in his big screen directorial debut for this modern twist on these two comedies.

For Josephine to be believable in her high-yield shenanigans, director Addison was convinced she had to have a posh British accent. Hathaway resisted as long as she could, then tackled the linguistic challenge. “I didn’t want to do the accent, Chris Addison made me,” confides Hathaway with a laugh. “I tried to convince him otherwise, but he won. We were very much in line about the tone, that it should feel elevated. We agreed the humor should feel very relatable, but also sophisticated. To that end, he felt very strongly that Josephine should be British. I am, of course, not British, so I thought she should be American. I didn’t want to work that hard. And also, I was scared to do an accent. But he insisted she would be funnier if she were English. ”

Wilson studied a con artist’s handbook—with reservations. “A studio executive had given me a book about how to con people,” Wilson says. “I could never do it in real life because I would feel so guilty about it. I could never actually pull something over on someone, especially not getting money from somebody by conning them. And if someone ever did that to me, I would be really upset. One time I did a television show in Australia where we were kind of conning people for like 30 minutes and I was pretty bad at it, because I still felt bad even though it was an acting job.”

Josephine’s fabulous home on the French Riviera was meticulously conceived by production designer Alice Normington. Adds Addison, “Alice is a stone-cold genius. We had a decision to make about whether we wanted to modernize the look of the movie or stick with a sort of classic-looking South of France look. We decided to modernize it. Yet we didn’t want it to feel like it would date too much.”

Everything looked so appealing that Wilson even arranged to buy a lot of the furniture from Josephine’s house for use in her real-life home. “I bought pretty much all the beautiful furniture that you see that was custom built for the film,” says Wilson. “Yeah, it’s going to be in my new Sydney house. That’s one of the perks of being a producer. I had first dibs on the props.”

While it was shot on the Spanish island of Majorca, which is a Mediterranean seaside paradise very much like Beaumont-sur-Mer. “It was an unusual decision, but it’s beautiful and elegant and it’s on the Med, and it give us these gorgeous trees and these wonderful blue skies and ocean,” Addison says. And who can complain about shooting on a scenic island and indulging in local delicacies? “It was off season and we’d work what are called ‘French hours’ on this film which means you don’t have a lunch break, but you finish early,” says Wilson.