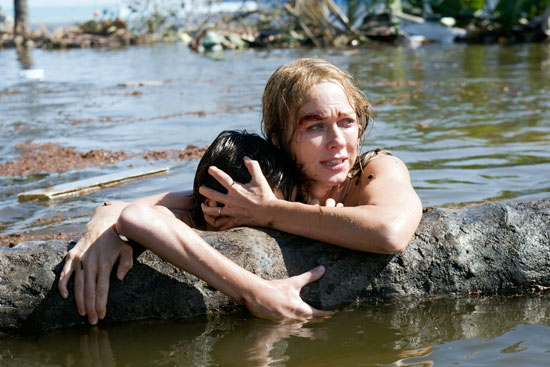 A powerful story based on one family’s survival of the 2004 Indian Ocean tsunami, The Impossible stars Naomi Watts and Ewan McGregor and is directed by J.A. Bayona. 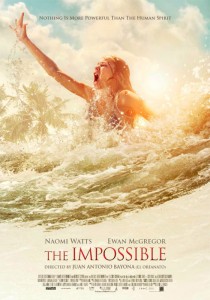 In order to recreate the tsunami, the production worked with six special effects companies. It took one year to create the impressive, horrific ten minute sequence in which the first enormous and deadly wave engulfs the coast

Based on a true story, The Impossible is the unforgettable account of a family caught, with tens of thousands of strangers, in the mayhem of one of the worst natural catastrophes of our time. But the true-life terror is tempered by the unexpected displays of compassion, courage and simple kindness that Maria and her family encounter during the darkest hours of their lives. Both epic and intimate, devastating and uplifting, The Impossible is a journey to the core of the human heart.

Maria (Naomi Watts), Henry (Ewan McGregor) and their three sons begin their winter vacation in Thailand, looking forward to a few days in tropical paradise. But on the morning of December 26th, as the family relaxes around the pool after their Christmas festivities the night before, a terrifying roar rises up from the center of the earth. As Maria freezes in fear, a huge wall of black water races across the hotel grounds toward her.

Although The Impossible is based on the incredible survival story of a family, the Alvarez Belons, they are Spanish in real life, not English as in the movie.  However, their cinematic doubles, played Naomi Watts and Ewan McGregor as parents Henry and Maria, and their three boys, played by Tom Holland, Oaklee Pendergast and Simon Joslin, are truly citizens of the world.  Although they speak in their native British dialects – McGregor favoring his Scottish brogue – McGregor’s character Henry works in Japan, and Watts’ character Maria is a doctor who has put her practice on hold so that she and their sons can travel with him.

The Impossible prepped for almost two years and shot for 25 weeks between Spain and Thailand on more than 60 sets. Principal photography took place at the studios of Ciudad de la Alicante, Spain and at multiple different locations in Thailand, many of which were where the actual events had occurred.  Because the film is about real people who underwent unimaginable horror and devastation, to honor and portray their experience, Bayona insisted on a rigorous authenticity.

Screenplay is by Sergio G. Sanchez (The Orphanage) with the story by Maria Belon.  Producers are Belen Atienza, Alvaro Augustin, Enrique Lopez-Lavigne and Ghislan Barrois.