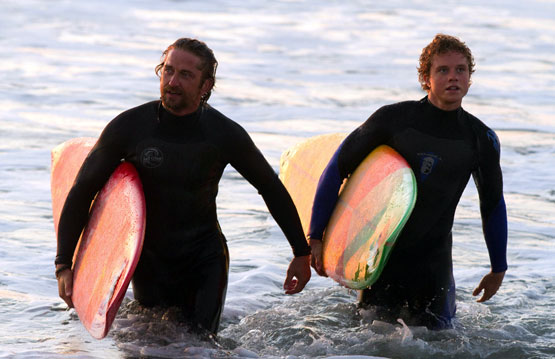 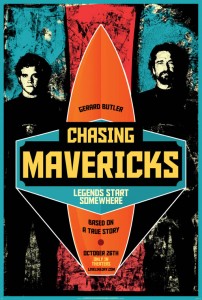 Brandon Hooper and producer Jim Meenaghan – who together wrote the story of Chasing Maverick – went directly to Frosty Hesson and Jay’s widow, Kim Moriarity, for permission to bring Jay and Frosty’s journey to the big screen. Other filmmakers had previously approached them, but Hooper and Meenaghan’s enthusiasm and ideas made Kim and Frosty comfortable with the idea of a film inspired by Jay’s life.

Bill Pope, ASC is the director of photography; and the executive producers are Gerard Butler, Alan Siegel, Georgia Kacandes, and David Weil.  The screenplay was written by Kario Salem, from a story by Jim Meenaghan & Brandon Hooper.  The film was directed by Curtis Hanson and Michael Apted.

Chasing Mavericks is the inspirational true story of surfing phenom Jay Moriarity (newcomer Jonny Weston).  When 15 year old Jay discovers that the mythic Mavericks surf break, one of the biggest waves on Earth, is near his Santa Cruz home, he enlists the help of local legend Frosty Hesson (Gerard Butler) to train him to survive it.  As Jay and Frosty embark on their quest to do the impossible, they form a unique friendship that transforms their lives, and their quest to tame Mavericks becomes about more than surfing.  Chasing Mavericks was made with the help of some of the biggest names in the surfing world, and features some of the most mind-blowing wave footage ever captured on film.

Gerard Butler and newcomer Jonny Weston bring Frosty and Jay to life on the big screen.  Butler, who following his triumphant success as a peerless warrior in “300,” has become one of today’s most versatile and in-demand actors, is, says Apted, “a movie star and the rock on which we built CHASING MAVERICKS. He dramatized the internal struggles that Frosty must navigate in the course of the film.  A lot of the cast were young and were able to learn from Gerard’s experience.”

Jonny Weston was among those benefiting from Butler’s experience and talent – especially given the fact that CHASING MAVERICKS is the young star’s major motion picture debut.  Apted elaborates: “Jonny brings a freshness and curiosity to the role.  He could have been intimidated by the challenges, but he had the ability to listen and learn.  Once Jonny saw the way through a problem, he doggedly stuck with it.”

“Jonny is Jay,” adds producer Brandon Hooper.  “There was just this purity in his eyes and in his spirit.”