On January 8, 2007, Paramount Pictures’ MTV Films and Nickelodeon Movies announced that they had signed M. Night Shyamalan to write, direct and produce a trilogy of live-action films based on the Avatar: The Last Airbender series; the first of which would encompass the main characters’ adventures in Book One. 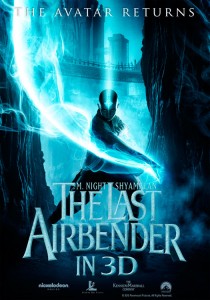 With a movie as technologically advanced as Avatar, the expectations of realistically throwing balls of fire and water were pushed to the limit on The Last Airbender. The film presented the opportunity to create and work on a variety of things never seen before, and Pablo Helman, who previously worked on Star Wars Episode II: Attack of the Clones, was the visual effects supervisor for the Industrial Light and Magic team on the film.

An announcement, revealing the July 2, 2010 release date was made on April 15, 2008. The film, which was in a dispute with James Cameron‘s film Avatar regarding title ownership, was also titled The Last Airbender.

According to an interview with the co-creators in SFX magazine, Shyamalan came across Avatar when his daughter wanted to be Katara for Halloween. Intrigued, Shyamalan researched and watched the series with his family. “Watching Avatar has become a family event in my house … so we are looking forward to how the story develops in season three,” said Shyamalan. “Once I saw the amazing world that Mike and Bryan created, I knew it would make a great feature film.” He added he was attracted to the spiritual and martial arts influences on the show.

The Last Airbender is a 2010 American adventure fantasy film released on July 1, 2010. It is a live-action film adaptation based on the first season of the animated television series Avatar: The Last Airbender. The film stars Noah Ringer as Aang, a reluctant hero who prefers adventure over his job as the Avatar.

Aang and his friends, Katara and Sokka, journey to the North Pole to find a Waterbending master to teach Aang and Katara the secrets of the craft. At the same time, Fire Lord Ozai, the current Fire Lord of the Fire Nation, is waging a seemingly endless war against the Earth Kingdom, the Water Tribes, and the already vanquished Air Nomads. The film also stars Nicola Peltz, Jackson Rathbone, and Dev Patel.

The first of a planned trilogy, The Last Airbender is the first Nickelodeon live-action film based on a Nicktoon and was produced by Paramount Pictures and Nickelodeon Movies. Development for a film began in 2007; it was adapted into a film by M. Night Shyamalan, who also directed and produced. Other producers include Frank Marshall, Kathleen Kennedy, Sam Mercer and Scott Aversano.

The series from which it was adapted was influenced by Asian art, mythology and various martial arts fighting styles and was created by Michael Dante DiMartino and Bryan Konietzko. Filming began in mid-March 2009; the movie was released in both traditional two-dimensional projectors, as well as in 3D (using the RealD 3D format).

The Last Airbender was made for $150 million and marketed with a budget of $130 million, making total costs at least $280 million. Other estimates put the cost between $100 million and $110 million, while various news sources reported the whole Last Airbender trilogy would be made for around $250 million. Premiering in New York City on June 30, 2010, it opened in the United States the following day, grossing an estimated $16 million.