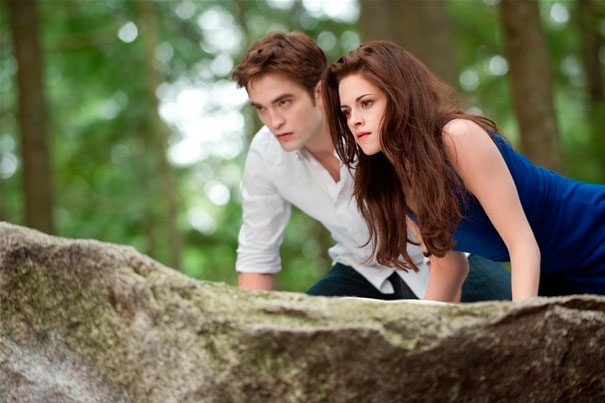 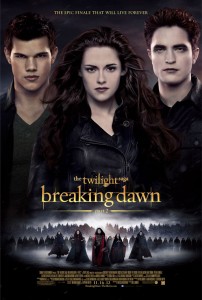 In April 2012, the crew and cast, including Pattinson and Stewart, returned for reshoots to pick up some additional shots for technical work with some of the cast and stunt actors. However, these re-shoots won’t include any new scenes or dialogue

By August 2009, Melissa Rosenberg said that the scripts for Part 1 and 2 were 75 to 85 percent completed. She found the greatest challenge in writing the scripts to be the final sequence of Part 2: “The final battle sequence is a big challenge because it lasts 25 pages”, she said. “It’s almost an entire three-act story in and of itself. You have to track [keep it all in one setting] hundreds of characters. It’s an enormous challenge to choreograph on the page and for Bill [Condon] to choreograph on the stage.”

She had written various drafts of the scene but, at that, hadn’t revised or discussed them with Condon yet. She said, “That’s the next big hurdle to sit down with the stunt coordinator and create the ballet. It’s a lot of work. I’m exhausted, but we’re intent on making them the best scripts yet.” Godfrey called Part 2 “an action film in terms of life-and-death stakes” and said that in Part 1 “there are the pangs of newlywed tension that occur that are relatable even in a fantasy film. Marriage is not quite the experience that they thought it was.” Condon thought of Part 1 “as a real companion piece to Catherine Hardwicke’s movie”. Condon explains, “Like, everything that got set up there gets resolved here. I think you’ll find that there are stylistic and other nods to that film.”

Godfrey considered releasing the second film in 3D to differentiate between the time before and after Bella becomes a vampire, an idea originally proposed for Eclipse, but said that the decision is up to Condon. However, he said that if the second film were to be released in 3D, he would like to shoot it with the proper equipment in “real” 3D as was done with Avatar (2009), not convert it into 3D in post-production as was done with Clash of the Titans (2010). However, it was confirmed on February 12, 2012 that Part 2 would not be filmed in 3D.

Filming started on November 1, 2010 and wrapped, for most of the cast, on April 15, 2011, ending the franchise’s three years of production since March 2008. Filming was shot on location in Baton Rouge, Louisiana; Vancouver, British Columbia; and at the Raleigh Studios in Baton Rouge.