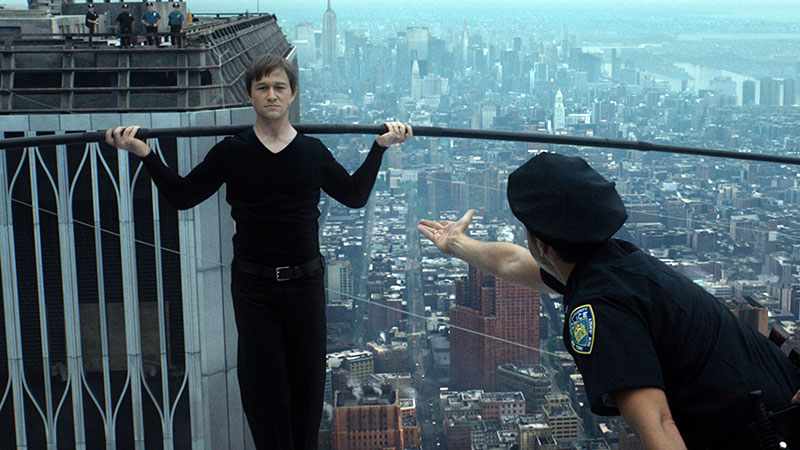 The day before Richard Nixon announced he would be resigning from office –Philippe Petit, a French aerialist, surprised the city of New York with a high-wire walk between the towers of the almost-completed and partially occupied World Trade Center.  Passersby without a moment to spare stopped in their tracks and looked up.  They saw the impossible: a man dancing high in the sky, seemingly in the thin air. 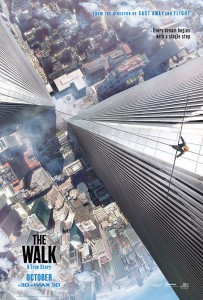 Reminiscent of his use of Forrest Gump’s own, unusual, voice to augment the narrative in that film, director Robert Zemeckis has Philippe Petit himself narrate moments in The Walk to add insight—especially to his inner thoughts on the wire.

Director Robert Zemeckis – one of cinema’s most accomplished filmmakers at integrating technology in the service of emotional storytelling – is putting moviegoers in Petit’s shoes. “When I first heard this story, I thought, ‘My God, this is a movie that A: should be made under any circumstance, and B: should be absolutely presented in 3D,” explains Zemeckis. “When you watch a wire walker, you always have to watch by looking up at him. You never get the perspective of what’s it like to be on the wire.  Our film will follow Petit’s story but will ultimately put you on the wire, walking with Philippe, and by presenting it in 3D, it is going to be spectacular and very emotional.”

Fittingly, Visual Effects Supervisor Kevin Baillie got involved in The Walk very early on. “I’ve been part of the project for six or seven years now,” he says. The project was especially intriguing for the VFX supervisor, because of the immense challenge it presented: the entire world of 1974 New York, as seen from thousands of feet in the air, between two buildings that have since fallen, would have to be created from scratch. “The production design department actually built on a giant stage the roof of one of the towers. It was a mind-blowingly cool, big set, but the city around it, the fog swirling between the towers, the towers themselves rising up from the city, all had to be created completely digitally, based on photo references,” says Baillie.

The film would not have been possible without the real Philippe Petit, who says that the film is a highly accurate portrayal of his real-life coup. “I have seen many a masterpiece by Robert Zemeckis, and this one of course is different to me, because it involves part of my life,” says Petit. “I must confess, I was on the edge of my seat – not just for the wire walk, but for the whole adventure. Seeing the movie in IMAX 3D, I was transported back there on that day August 1974.”

Joseph Gordon-Levitt takes the lead as Philippe Petit. In fact, Gordon-Levitt embraced the challenge of walking on the wire. “It was a serious challenge, but I like a challenge,” he says. “I love doing stuff with my body – incorporating physicality into a performance.”

Gordon-Levitt learned to walk on the wire. He couldn’t have asked for a better teacher: Philippe Petit himself. “I spent eight days straight with Philippe in a one-on-one workshop with him,” he says. “He was really generous with his time with me; we spent quite a bit of time together. He was teaching me how to walk on a wire, but what he was really teaching me was much broader than that. For Philippe, that balance on the wire is a metaphor for his whole life and creativity.”

“I was able to teach him how to walk on the wire,” says Petit. “I did a private, one-on-one workshop, excruciatingly tiring, nine AM to five PM every day. Breaks of only thirty seconds – that’s how I was. I wouldn’t let him go. We started with the line on the floor, and by the end of our time, he was seven feet high on a thirty feet long wire.”

Part of playing Petit required Gordon-Levitt to master lines in French, and then many more lines in English with Philippe Petit’s pronounced Parisian accent. “The funny thing about Philippe is that he still has a thick French accent, and he will openly admit that he keeps his French accent on purpose – I think he likes it because it distinguishes him. It’s his character,” says Gordon-Levitt.

Oscar® winner Ben Kingsley plays Papa Rudy, the man and mentor who taught Petit how to walk on the wire and French-Canadian actress Charlotte Le Bon takes the role of Annie, Philippe’s girlfriend.

To create the 1970s wardrobe for The Walk, Zemeckis turned to Suttirat Larlarb. A longtime collaborator with director Danny Boyle, the veteran designer was honored by her guild with the CDG Award for Excellence in Contemporary Film for her work on Slumdog Millionaire; she also won an Emmy Award for her work with Boyle on the London 2012 Olympic Opening Ceremony.