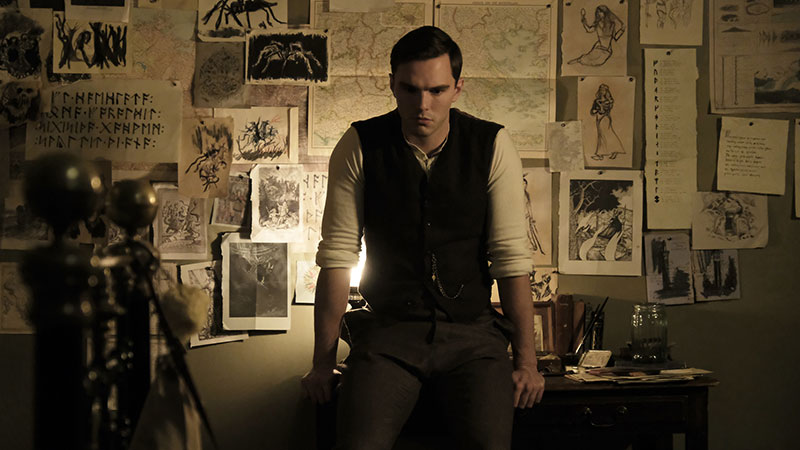 Now, with Tolkien, comes a story of how the young Tolkien transformed from a lonely orphan into one of the great storytellers of all time — a story that is itself an enchanting tale lit with the power of imagination, the bonds of fellowship and the forging of purpose in the fires of love and war. 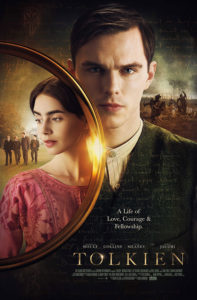 Director Dome Karukoski related to Tolkien at the deepest level, because he too grew up without a father. Born in Cyprus to a Finnish mother, Karukoski didn’t meet his American father until he was 14, so he was able to instinctually tap into Tolkien’s loneliness and understand why the communion and grounding he found with his friends in the TCBS and with Edith operated like a magic spell on him.

Tolkien’s life began far from the incomparable characters he forged in his famous novels. Irish playwright and screenwriter David Gleeson was mesmerized by Tolkien’s own story of a young man on a heroic quest.

The script by Gleeson and Stephen Beresford (PRIDE) was full of energy, humor and had a feeling of both physical and emotional adventurousness not often associated with the lives of writers behind their desks. Spanning from childhood dreams to a surreal vision of Tolkien at war, it also had an epic sensibility Tolkien himself might have recognized. The producers at Chernin were immediately ready to jump in. “By pulling back the curtain on Tolkien’s early life, you find a story that delves into where art and stories come from,” says Archery Pictures producer Kris Thykier. “For Tolkien, friendship was one of the most important things in the world and here you see why that became so central to his life and works.”

Co-producer Dan Finlay notes that the appeal of the story felt far broader than anyone anticipated. “It’s about things everyone finds transporting no matter who you are: friendship, love and the battle of light against darkness.”

Now the pursuit began to find a director with a visual imagination unique enough to match the material. The producers handed the reins over to director Dome Karukoski whose previous Finnish films include multiple award-winners TOM OF FINLAND, THE HOME OF DARK BUTTERFLIES and LAPLAND ODYSSEY, with the two former serving as Finland’s official entries for the Oscar® Best Foreign Language Film category. “When we saw the intensity of Dome’s passion for telling this story, it was clear he had to be at the helm,” says Ready of the choice.

Being Finnish, Karukoski felt a special kinship to Tolkien, having read that Tolkien taught himself the language as a student and held its culture in high esteem. “Tolkien is thought to be almost ‘Our Own Icon,’” says Karukoski. “Tolkien was apparently captivated by the Finnish language and our mythology Kalevala; He even wrote his own version of the Story of Kullervo from the Kalevala. For me it’s obvious that Tolkien has taken elements from the Finnish language and Kalevala into his own legends.”

To take Tolkien from the pages of history and give him a palpable, modern life, the filmmakers would need two different actors—and both needed to be able to let the audience see inside the rolling wheels of Tolkien’s imagination. The search for the adult Tolkien led to one of the most promising actors of the last several years: Nicholas Hoult, who first came to the fore as a child actor in ABOUT A BOY and has gone on to portray Beast in the X-MEN series, the unforgettably intense Nux in MAD MAX: FURY ROAD and most recently, the flamboyant Harley in THE FAVOURITE.

Hoult dove headlong into research, reading everything he could find on Tolkien, but also looking for ways to make the role his own. “I read all the biographies, listened to recordings of Tolkien in later life, and went through all the photographs,” says Hoult.

While Hoult plays Tolkien in young adulthood, it is newcomer Harry Gilby who plays the teenage Tolkien. Says Karukoski of Gilby: “When I first saw Harry, I was struck by the fact that he’s almost as tall as Nick and he looks, and even walks, like Nick. He also had this sense of pure innocence that I felt captured something about Tolkien as a younger boy. I felt he brought out that playful, childlike quality that Tolkien always kept alive inside himself.”

From the start, Karukoski saw the natural world, childhood memories, the horrors of war, the wonders of a peaceful home life — what must have been Tolkien’s greatest influences, as the film’s visual building blocks. He also saw the film as divided into three distinctive looks: Tolkien’s school days are charged with color and innocence; then the war brings a swirling darkness; and finally, Tolkien emerges into the fresh light and serenity of family life.

Cinematographer Lasse Frank had an idea that the camera would feel inseparable from Tolkien. “The camera always moves with Tolkien and his emotions. So if Tolkien sits and is in peace, the camera sits. If he moves or he is in turmoil, the camera amplifies or embodies that feeling with movement. Not all of the locations allowed this, but it gave us a really close experience to our actors and our main character,” the director explains.

The sets also needed to have a sense of life to them, real but just a little dreamy, the way a blossoming writer might see the world, a task that fell to production designer Grant Montgomery. “I approached the film as a love letter to Tolkien and all the things that mattered to him,” he says.

Since the bombs of World War II largely destroyed turn-of-the-century Birmingham, the production utilized Liverpool, which still retains some pre-World War I architecture. There, they recreated Barrow’s Bookshop, with its tempting tea room that draws the TCBS club to meet there, using Liverpool’s St. George’s Hall, a distinctively 19th Century building in the neoclassical style.
The Grand Hotel where Tolkien and Edith threw sugar lumps into guests’ hats was recreated in Liverpool’s Town Hall in gilded tones. “I wanted a rich, dream-like quality to the hotel, so that you feel you’ve gone from the darkness of Mrs. Faulkner’s to this real sense of light,” Montgomery explains. The set of King Edward’s School, recreated in the Victorian-style Rochdale Town Hall in Manchester, was lined with Gothic delights. To shoot the scenes in Oxford, Karukoski felt only the real thing would do. “Oxford was not only where Tolkien’s intellectual life was centered—it’s also where he and Edith made their family. There was for all of us a feeling of magic to being there,” says the director.