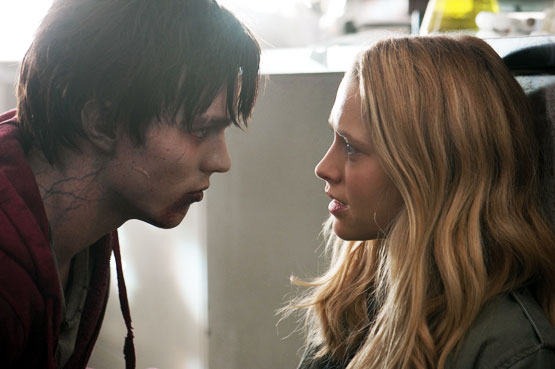 An unlikely romance between a beautiful human teen and a sensitive undead slacker sets off a chain of events with the power to transform the world in Warm Bodies, the hilarious and heartwarming zombie action rom‐com based on the popular novel by Isaac Marion. 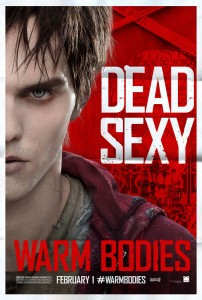 Finding a location with an abandoned airport seemed like a tall order, but with the help of Summit’s head of physical production, Andi Isaacs, the filmmakers were able to get everything on their wish list in one city: Montreal.

For his part, John Malkovich says he was attracted by the film’s storytelling. “I especially liked the two main characters and the way the story unfolds. In the writing of the screenplay based on the novel, there’s still quite a novelistic approach that I liked.”

It’s a familiar scenario—a mysterious virus has devastated civilization, turning its victims into flesh‐eating monsters without memories of their past lives. What is left of humanity is holed up in heavily fortified bunkers where they live in fear of their former loved ones. But all that changes when a ravenous zombie hunting party crosses paths with a human reconnaissance crew scavenging supplies. R (Nicholas Hoult), a soulful zombie, is so captivated by the lovely and living Julie (Teresa Palmer) that, instead of eating her brains, he saves her from being consumed by his companions.

Warm Bodies, began life as a seven‐page online short story titled “I am a Zombie Filled with Love” that attracted a wide Internet audience and led author Isaac Marion, with some encouragement, to expand it into his debut 2010 novel. Described as a “zombie romance” by the Seattle Post Intelligencer, complete with allusions to Shakespeare’s “Romeo and Juliet,” the novel captivated producer Bruna Papandrea.

Papandrea, who had just started her own production company, Make Movies, immediately set about securing the film rights, and three days later she was in Marion’s hometown of Seattle to meet with the writer. Soon afterwards she sent the manuscript to some of her closest studio contacts, including Erik Feig, a production executive at Summit Entertainment.

For the role of R’s human love interest, Julie Grigio, the filmmakers chose Australian‐born Teresa Palmer from a shortlist of five actresses who made it through to read with Hoult.

“There’s something about Australian actresses, a confidence and strength,” says Papandrea, who is an Aussie herself. “It’s a very hands‐on approach over there, a little different from America. It’s difficult to find a girl who is young, very beautiful and has vulnerability, but also is such a fireball.”