Based on the emotional and inspiring novel by literary superstar Nicholas Sparks, The Choice chronicles the power of love from a young couple’s rocky first meeting to a life-long romance that will be tested as their lives take a turn that neither of them ever anticipated. 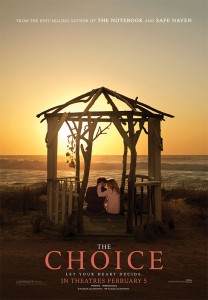 To date, films based on Nicholas Sparks’ inspirational stories have grossed over three-quarters of a billion dollars and have helped launch the film careers of a generation of young actors, including Channing Tatum, Ryan Gosling, Mandy Moore, Rachel McAdams, Zac Efron and Amanda Seyfried.

With his film, The Choice, internationally best-selling author Nicholas Sparks returns to his beloved North Carolina roots for an inspiring love story about the unexpected choices, large and small, that come to define a lifetime.

“The Choice may remind people of my very first novel, The Notebook,” says Sparks. “A couple comes together and we watch their lives unfold. We see what eventually happens between them and the choices they make. Watching it, you may think the title refers to a choice that occurs early on, but there are plenty of twists and turns that make the story even more memorable and profound.”

Nicholas Sparks Productions, launched in 2012 with Theresa Park, Spark’s longtime literary agent and creative partner, oversaw the making of The Choice, the company’s first feature film. “This is one of my favorites of Nick’s books,” says Park. Working with Sparks, the master of old-fashioned romance, on a fresh, new look at the beloved genre brought producer Peter Safran into the fold. “Nick taps into feelings that we all experience, which is what I love about his work. He’s wonderful at creating compelling situations in which two people you want to be together have to overcome almost impossible hurdles. The Choice takes all of that to the next level.” says Safran.

Making a film outside the studio system gave them the opportunity to elevate the genre, Safran explains. “There have been some wonderful films made from Nick’s work, but we didn’t want to do the exact same thing again. ” With that in mind, the filmmakers brought in Bryan Sipe, a young screenwriter whose recent romantic comedy, Demolition, debuted at the 2015 Toronto Film Festival. The New York-based, North Carolina-educated writer brought a contemporary perspective, as well as an ear for crisp and fresh dialogue, while shining a brighter light on the supporting characters. Sipe says he prefers writing scripts in which the most impressive pyrotechnics come from human emotion rather than big-ticket special effects.

The priority for choosing a director, Sparks says, was finding someone with a vision for the film that matched the potential that he and his fellow producers saw, as well as the experience to realize that vision. They found that and more in Oscar® nominee Ross Katz (Best Picture, In the Bedroom, 2001; Best Picture, Lost in Translation, 2003), he says.

Katz first learned about The Choice when his agent called and told him to stop whatever he was doing and read the script immediately. “There was so much about it that was surprising, in the best possible way,” the director says.

Casting The Choice became a bit like a jigsaw puzzle for the filmmakers, starting with a charismatic pair of performers to play Travis and Gabby, and then surrounding them with a group of actors who formed an authentic community of friends and family.

To play Travis’s reluctant love interest, the producers made up a short list of actresses, topped by Australian charmer Teresa Palmer. Her sunny outlook and dazzling smile had made her a contender for the lead in Sparks’ previous film, The Longest Ride, and her performance in the zombie rom-com Warm Bodies left an unforgettable impression on the filmmakers. Palmer has nothing but praise for her co-star. “Ben Walker is an amazing, Julliard-trained actor,” she says. “I’m not classically trained, so I have to be completely present when I am working with him. Finding our characters together helped create some wonderful unscripted moments.”

Production designer Mark Garner is a longtime Sparks collaborator, having worked on four previous films based on his novels. One of his biggest challenges was to find two adjoining houses for Gabby and Travis that would reflect their differing priorities and provide a clear sightline from her house into his yard. He came up with an ambitious solution.

Garner located a spacious 1940s Colonial with a sprawling green lawn overlooking the Intracoastal that fit the bill in all ways but one. There was no cottage close enough to serve as Gabby’s home. But, he decided, the lot was big enough to build one. He constructed an 860 square-foot, one bedroom cottage specially designed to accommodate the film crew and their equipment. The finished product so impressed the homeowners that they asked to have it left on the property.

Nicholas Sparks famously sets his romances in his bucolic home state of North Carolina, often on the tranquil Intracoastal Waterway and the soft sand beaches of the coast. The Choice is no exception. Shot over 30 days in and around Wilmington, the production used many practical locations, including well-known local hangouts The Dockside Restaurant and Airlie Gardens, as well as spending several days on the Intracoastal in a 32-foot, 250-horsepower Regulator sport-fishing boat with Ben Walker at the helm.